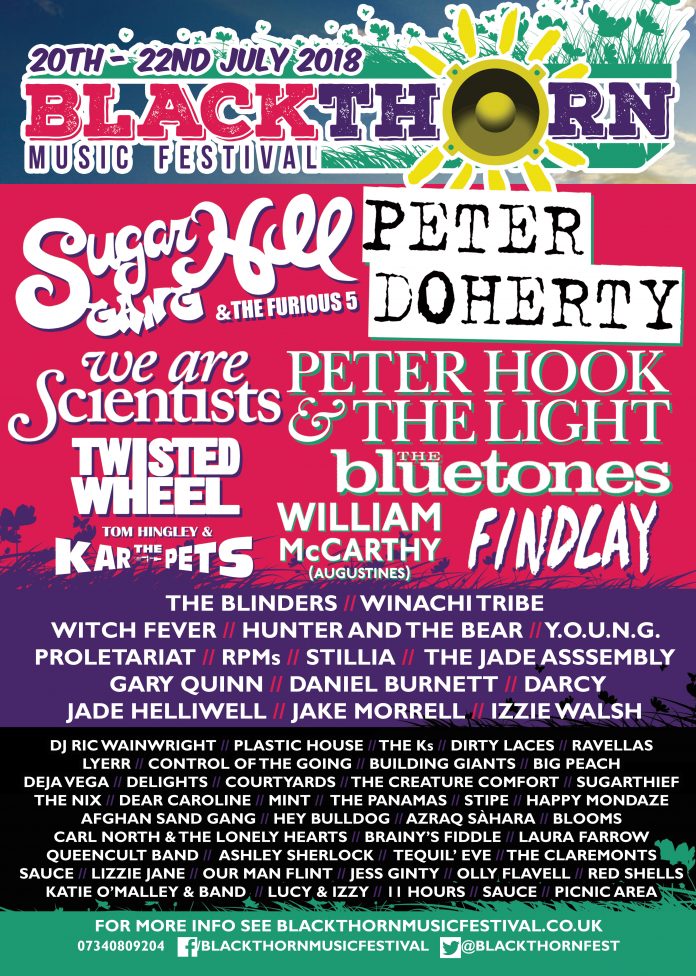 It’s that time of year again where Student Pages looks ahead to the highly anticipated Blackthorn Music Festival, one of the North West’s leading summer music events. Taking place between Friday 20th July and Sunday 22nd July at the picturesque setting of Whitebottom Farm, Etherow Country Park, Blackthorn always has an emphasis on local talent within a variety of genres, including indie, rock, psych, country and acoustic music, and that tradition is upheld once again. What’s more appetising this year is the bigger acts on offer, with Manchester legend Peter Hook & the Light headlining Sunday, supported by nineties indie rockers, The Bluetones, with the legendary funky act, Sugarhill Gang performing earlier in the day. Saturday’s big hitters comprises of Pete Doherty on the main stage, supported by We Are Scientists, William McCarthy, from modern indie favourites, Augustines, and local favouries, Twisted Wheel, who seem revived after a recent run of sold out and emphatic gigs.

Looking at the best of the underground scene, from a personal point of view, The Winachi Tribe are one of the bands that tops that list with their funk, indie, psych, dance and rock hybrid that’s had audiences mesmerised from Manchester to LA. Deja Vega and Hey Bulldog are two psych rock bands playing who I’ve been impressed with in the past. The Blinders are another band on the rise, and after last year’s blistering performance, and subsequent series of sold outs dates over the past twelve months, they are surely going to be one of the hottest acts of the weekend. The Red Shells were a surprise to everyone last year. Two twelve year old lads confidently striding onto and owning the stage! What a refreshing sight! I’ll be eager to see how they’ve progressed when playing again this year. Several indie rock bands will grace the three stages, and The Jade Assembly, Stillia, and Dirty Laces are a few of the best on the bill that deliver. Going slightly more alternative into punk, The Creature Comfort and Witch Fever are two fiery and captivating acts I’m looking forward to seeing perform.

These are to name but a few of the recommendations from personal experience, and as always, I’m intrigued to unearth a band I’ve never seen or heard of before.

As usual, aside from the new music and legends on offer, the customary tribute acts will take to the stage on Friday, with Tom Hingley & The Kar-Pets providing the ‘sort-of’ tribute headline act, supported by Happy Mondaze and Stipe – REM Tribute, which is set to enliven Friday with a series of well-known hits.

Blackthorn has proved once again that it is becoming one of the most sought-after festivals in the North West. Big named acts coupled with burgeoning underground talent provide an array of entertainment throughout the weekend. If you like your music and festivals to be fun, family friendly and set in a beautiful, safe environment, then Blackthorn is a must attend. A full list of bands/artists, prices and other details can be found at www.blackthornmusicfestival.co.uk.

Reviews of each day will be coming up after the 22nd July, but if you want to look back on the previous three years’ then click here.

Mother! REVIEW: One of the most daring, inescapable nightmare films of...