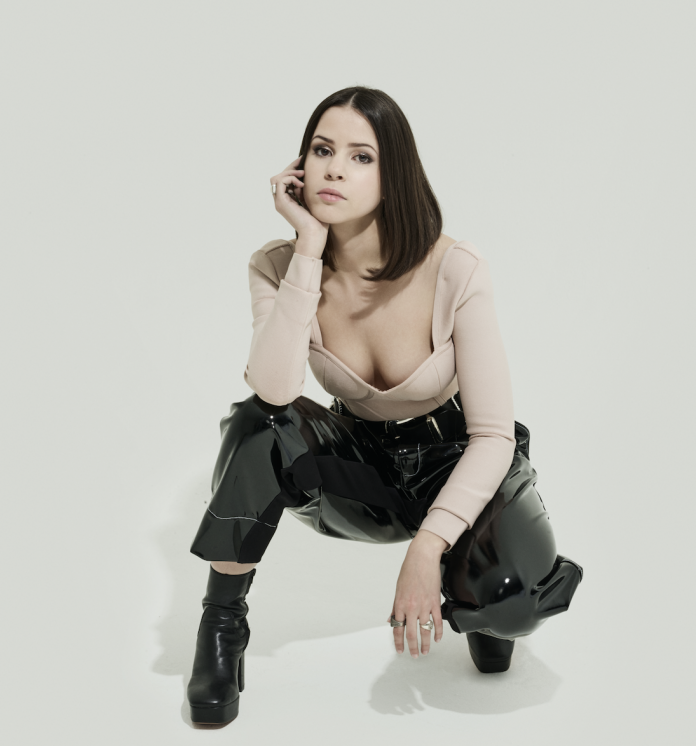 At only 21 years old, multi-platinum selling singer-songwriter Marina Kaye continues to push the boundaries with her potent new single ‘The Whole 9’. Picking up where she left off after dropping ‘Twisted’ at the end of last year, it’s a release that recommences her darker, sultry rebirth with suitably twisted piece of alt-pop.

We caught up with the exceptionally talented artist to find out more about her rising popularity and where it all began.

Marina got into the music industry when she was only 14, and by her own admission, luck played an important role. She explains how her producer Jan came across her covers on YouTube, contacted her, which subsequently led to an album being produced that was extremely successful in France.

“I didn’t really choose this path, I was just very lucky. The stars were aligned for me”.

However, it was not all as it seems. Openly admitting that school was a hard time for her. Admitting that she was bullied when she won France Got Talent and had to resort to home-schooling at some point. To get passed this, she “grew” thick skin and believed in myself as much as she could. Marina also opened up about suffering from depression from the age of 10 – 17. For her, the hardest time was aged 15. Marina found turning to music and writing helped her a lot. She realized that life is worth fighting for and it is important to be grateful for everything you have. Highlighting that when things were really dark, she would listen to music, write a few lines and tell herself its going to be ok!

Marina describes her music as very dark and personal. Opening up, she believes what makes it stand out is those people that are in pain, irrespective of what form this may take, which allows them to relate to her lyrics.

She points to her new release, The Whole 9, which she explains is one of those very vulnerable songs you need to write at some point in your career. Marina highlights that when she wrote it, she was not thinking about someone in particular but remembered how it felt for her when she started falling for someone. “My overthinking ruined a lot of things in my life and I’m always scared it might ruin a beautiful relationship.”

Marina details how her upcoming album has really strong lyrics and melodies, which she is exceptionally proud of. Openly admitting, that her all time favourite will always be her single “Something”.
For her listeners, she wants them to listen to her music and remember that no matter what they see on social media, and what they hear from people’s mouths, everyone is going through something and they’re not alone.

“I’ve had some really dark times but I think I never lost hope, and that’s what I want them to feel when they listen to my songs”

Marina humbly notes that she’s been extremely lucky in life. Everyone she has met along her journey, whether good or bad, has taught her something about herself, and about life itself.

Marina had to learn how to use her platforms because it was not natural at all for her to post all the time.  However, she started to enjoy it and now she sees it as a sort of a game.

“I think social media is a beautiful tool for all artists to use. But you have to protect yourself from hateful comments and trolls. I stopped reading comments 2 years ago because some of them were just too mean. But today you can start and build a career only with social media which is fantastic, everyone has a voice now and you no longer have to be signed to promote your music, which is awesome.”

For Marina, one of the most important things is to find the right team that you can totally open to and that understand your thinking, your emotions and how you want things to sound. Understanding it and being able to reflect this in the production. She highlights how she is extremely hands-on when it comes to the production, but notes that she is fortunate to have found the right people that are equally detail oriented. Marina explains how the trick is to know when to stop and accept the track is ready and not keep fine tuning everything.

For students looking to get into the music industry, Marina recommends surrounding yourself with the right people, to not place trust in everyone, to never stop working and above all to stay humble.

“Honestly, going through life in general has been pretty tough, and having to do so in the public eye was even harder”

Having just completed her third album, Marina is currently working on her upcoming tour, with plans to release as many good songs as she can, be on stage, meet new people, and be happy.