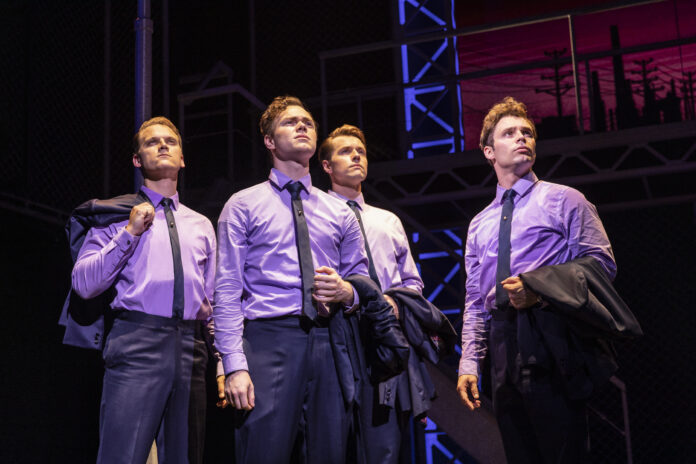 What a Night!! I was never going to be the same! We had the honour of being invited down to Trafalgar Theatre to watch the Jersey Boys. For me, the music is iconic and spans far further afield than the 60’s from which the period is based around. Where theatre productions have sought to recreate successful novels and hit movies, Jersey Boys story is based on the true life tale of four extraordinary men, who by their own admission, got into extraordinary trouble!!! Better known as Frankie Valli and The Four Seasons. From deep mob connections to the real story of four talented individuals who have been quoted as providing four different versions of those events that started over 40 years ago!

For those not familiar with The Jersey Boys, the show is an absolutely brilliant production. A story about revenge, betrayal, crime, punishment, family and woman. The show itself does start slow, which does leave you feeling is there actually any more to come. Although, the genious of this way of story telling, is the producers are clearly keen to give you a real raw insight into the beginning of each of these individual characters. Comprising of Frankie Valli, Bob Gaudio, Tommy DeVito and Nick Massi. The type of guys, your mom’s would love, and your father’s would wish to stay clear of as far as you can run!!!

Once you get past the initial character intro’s the show comes to life. Shelling out legendary hits including, Walk Like A Man & Big Girls Don’t Cry, you find yourself transported back in time to the 60’s and the lifestyle that accompanied living in such an incredible music genre. Accompanied by classic Cadillacs, and a band that is phenomenal. If you enjoy theatre, this is a show that is a must see! And even if you are not a theatre goer, this show will in my view transform you, as at its heart is real life stories, that are so raw, that you cannot but feel drawn into their lives and the rollercoaster of emotions that accompanied this incredible quartet! [Star Rating 5]

Check it out here…