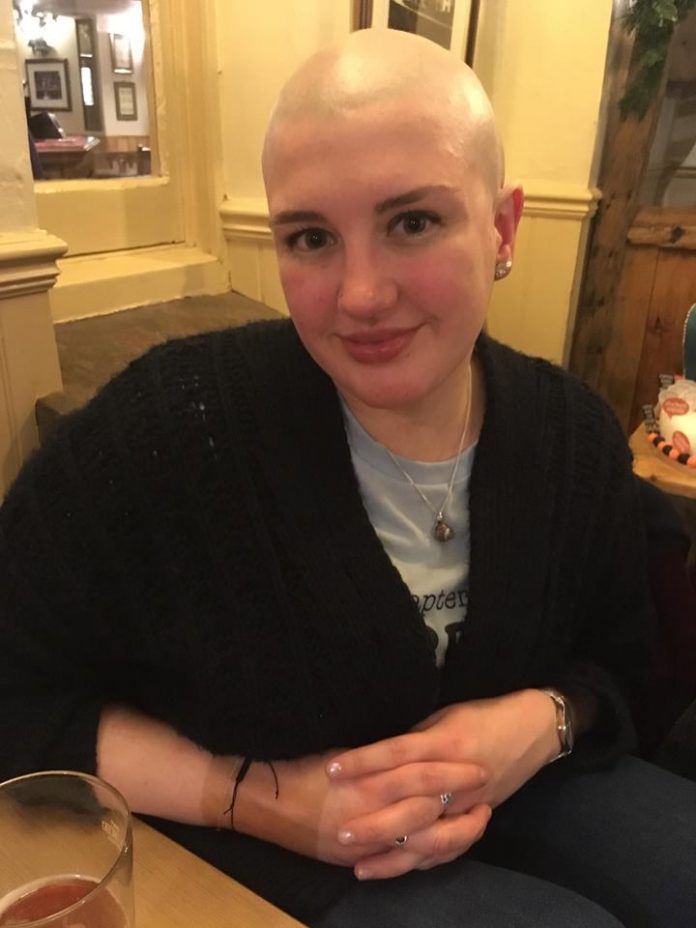 Amelia Hartley went bald to raise money for both CALM, dedicated to preventing male suicide, and Student Minds, a student mental health charity. For her, “If I can lay my head bare, then I can lay my emotions bare too,”.

Depression and anxiety have affected Amelia’s school and college years, and her attempt at university. Two years ago she couldn’t picture the next day, whereas now almost every day she thinks, ‘this is the happiest I’ve ever been.’ “I’ve come through 7 long years with a few scars, a few lost friends and many new friends. At my worst, I’ve been unable to move, breathe, talk and think for huge periods of time, but I often kept it to myself. Even some of my closest friends aren’t aware, but that is how I’ve been for most of my life.”

In December Amelia took the plunge and shaved it off, donating her hair to the Little Princess Trust, and raising £2,689 in the process. “As my story has been shared and the months have gone on, I’ve realised the impact I am having on others is far greater than I ever expected.”  When Amelia started university, she wasn’t in a great place and found settling into university hard, as people did not know her background, and she struggled to articulate how she felt, and what was going on for her. “After a bereavement in my first term, I fell behind academically and never managed to catch up due to the subsequent flare-up in my mental health difficulties.” Losing her friend to suicide was the worst thing that has ever happened to Amelia who found it agonising and heart-breaking, “If there were anything I could do to go back in time and ask how he was and what was going on for him, I would. Unfortunately, I can’t. But I can work to prevent suicide and to support others, and I’ll do all I can. This is for them.”

With a lot of guidance and encouragement, Amelia chose to withdraw from university in her second year and is pleased that she did. “I’ve thrived outside of university and not having a degree hasn’t affected or hindered me at all. I realised that my mental health needed to be my priority and it always should be. I have learned to manage it and not to let it consume me. It has been incredibly isolating at times; however I wouldn’t be who I am without it.”

Volunteering for Student Minds was the best part of Amelia’s university experience as it provided a safe and non-judgemental space for other students experiencing low mood and mild depression to share their experiences and support one another. “It was so empowering, motivating and uplifting to give students a chance to speak openly and honestly about what they were feeling. It also kept me busy, helping to detract from any negativity I was experiencing with my university struggles, and giving my time to others was very rewarding.”

Amelia advises that no matter how dark things seem, and how far away you feel hope is, you’re stronger than you think, “Put your mental health and wellbeing first – you’re stuck with it forever so do what you need to do to thrive, and aim for happy!”

My Experience as a UNI Student on the CORONA VIRUS!!

Learning to Balance Dreams and the Reality of an Invisible Disability