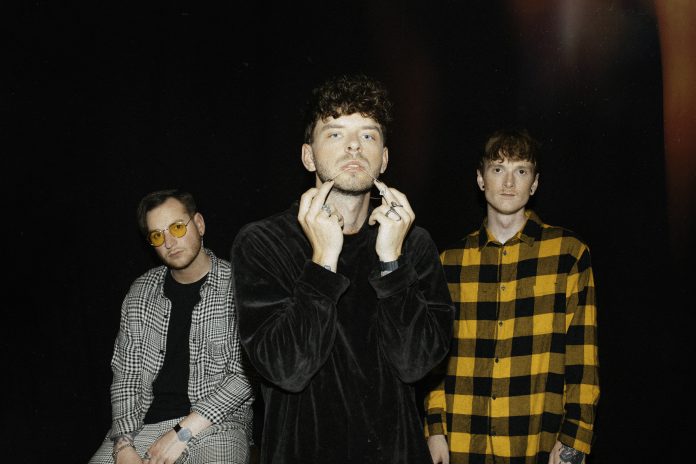 “My mentality in this has always been to work my hardest, trust my gut and take chances. Asking for a chance and getting a no is better than waiting for someone to knock on your door. I work the best when I’m under pressure”.

We caught up with Stockholm based trio Normandie following the release of their highly anticipated track ‘Hostage’, a hugely personal song about a web of panic attacks and fighting internal demons that affected singer Philip Strand.

Lead artist Philip explains that his humble beginnings started when he received a guitar on Xmas at the age of 9. What followed was a Youtube channel which garnered 10,000 subscribers in very short space of time at the age of 15. This led to the artist being invited to join Normandie at the very start of their journey. Six years later, the trio have seen themselves through tours, released 2 albums with a combined stream of 50 million.  “I think I knew from an early age that I couldn’t stay away from music. I skipped a lot of classes in high school to play music instead, to the point where I actually got a warning and suspended “study grant”.

Phillip explains how for their latest release “Dark & Beautiful Secrets”, he decided to open up about himself rather than just writing love songs. The inspiration for the song came to the artist when he stumbled on a new angle to his lyric writing! He believes what ultimately makes them stand out is the pop writing influences within Strand’s “rock writing”. Whilst Normandie’s productions cross breeds through a bunch of genres from the artist’s early childhood.

When it comes to their fans, Normandie is keen to see people spending quality time with themselves rather than looking around for connections. “We spend so much time letting other people/ideas sculpture us that we forget that we can sort of puzzle our identity together ourselves”,  they explain. Interestingly, the lead singer points to how he has always been a lone wolf. Something the artist regrets, as looking back Strand see’s that in reality they were encouraging him to take risks of being a musician. “I owe a lot to them”, he admits! He goes onto highlight how your chance of thriving in the music industry is far bigger if you have an edge and uniqueness. To be bold, and keep your eye on the trends coming through. However, to equally bring your own plate to the table.

The artist points to his greatest challenges as keeping his goals high but his expectations low. “In the beginning I got a bit ahead of myself when getting a song “on hold” with a bigger act. Anything can happen, so I just gotta keep working on myself and my stuff and trust the process”. Currently in the process of releasing their 3rd Normandie album, the band have plans to go to Rotterdam for the Eurovision Song contest in May, where he has subsequently produced and written the Irish entry! #watchthisspace