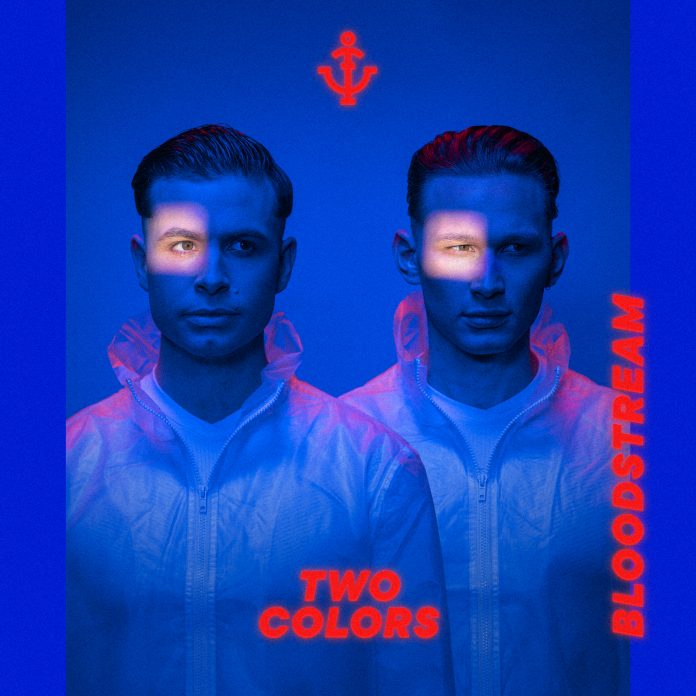 We caught up with Berlin based duo twocolors following the release of their latest single ‘Bloodstream’. Marking their first release since their viral release of “Lovefool”; a track that amassed in excess of 865 million streams and counting. Fronted by Pierro and Emil, the duo begin by explaining how they grew up listening to a great deal of music. Pierro, for his part, always sought a career as a musician; whilst Emil, found inspiration through his father, who was a performer himself. This ultimately led to a natural development for the artist, seeking to follow in his father’s footsteps.

Their latest release Bloodstream was created through the duo experimenting with different chords during one of their sessions. This led to the Berlin artists to team up with writers (Rene Miller & Hight) to create a song that focused around the emotions people go through during a breakup. In the artists words “the different ways they escape their pain and go through withdrawals”. They go onto describe their music as a combination of driving electro and melodic pop. Highlighting that what ultimately makes their music stand out is the danceable melancholy within their music.

The artists openly admit to coming across as selfish in their approach to satisfy their needs first when it comes to their music. Pointing out that this is a direct reference to their wish to invoke feelings of hope and positivity in their listeners through her artistry. Most notably where the heart is concerned. They explain how their inner circle have always been supportive, even in the beginning when their following was no where near to the extent it is today. Having dealt with their share of haters and doubters, the duo are thankful to have not experienced bullying in an extreme way. Choosing to use negative comments or feedback as fuel to pursue their dreams even more.

“Just like everyone else, we all have our inner demons to overcome. We do make sure we have a good work-life balance to not overwork ourselves to the point of being mentally and physically drained. We take our mental health very seriously”.

The duo explain that nowadays, it’s absolutely necessary for artists to have a digital presence on social media platforms in order to connect with their fans and for people to get to know their music and what they’re about. Whilst finding people in the music industry that were akin to their sound has not been openly important to the duo; they do make a point of noting how they chose to attend as many live shows as they could to find that inspirational spark to bring back to their production process! Their biggest challenge being finding a team who believes in them as artists and sharing their vision.

TwoColors believe learning an instrument is instrumental in developing your craft. To watch tutorials and attend live shows where possible. To show patience, and listen to a range of genres to develop your ear. But ultimately to be true to yourself and to never forget to have fun. The duo are currently working on new material, finalizing tracks for their upcoming releases, in addition to remixes. In addition to creating their own covers, and directing their music videos. #watchthisspace