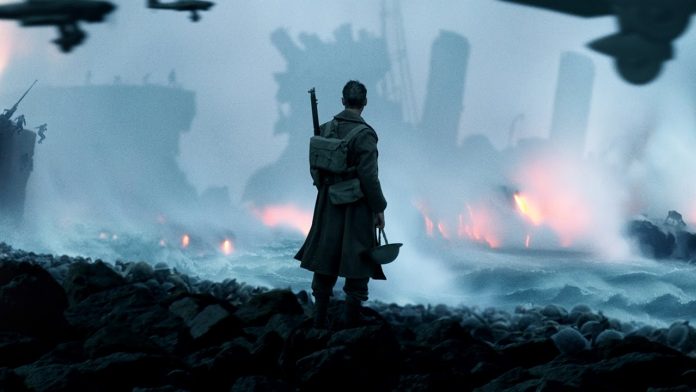 Dunkirk, written and directed by visionary director Christopher Nolan, is his latest epic this time focusing on one of the most iconic moments of the Second World War; Dunkirk. The film is mostly made up of non-established actors such as Fionn Whitehead, Harry Styles and Barry Keoghan. However, great performances are put in by more well known faces including  Tom Hardy, Mark Rylance and Kenneth Branagh.

This film follows a very successful run of films from Nolan of recent date both critically and financially, including; The Dark Knight, Inception and Interstellar. The film had a lot of critical buzz from its trailers to its early reviews, meaning the anticipation of this film was high, but like always that doesn’t mean it will necessarily live up to it. However, it does.

The film is incredible. From the first minute to the last minute, I was hooked. It was tense, frightening, emotional and yet one of the most beautiful films I’ve ever seen. I was lucky to see the film in 70mm (the way the film was intended to be seen yet only available in a handful of cinemas nationwide) and it was stunning. I’ve never seen a film like it before, and was blown away.

The film is the perfect example of how a micro film can work as a blockbuster in today’s movie environment. Its lack of narrative and highly developed characters work completely in the films favour. It instead makes you look at the event as a whole – the battleground of Dunkirk is the films main protagonist. The film is a spectacle and what it lacks in narrative it more than makes up for some of the most gripping, tense and suspenseful action set-pieces ever put to film.

The film is very simple. Survival. Its not pretty, its dark, dirty and terrifying. However a war has never looked so beautiful – the cinematography is something to truly marvel at, its incredible. To be honest, there’s not much more to say about the film really. Its a masterpiece of epic proportions, easily not only one of the best films of the year but perhaps one of the greatest films of the 21st century. If you can, watch the film in 70mm it truly is the best way to experience this war epic.

The Dixon Brothers: 6 on Saturday!!