Chef Sean has an endless passion for music, discovery, people and life. The award winning artist has just dropped his visual for his latest release Runaway, taken from his debut album My Life where he enlisted the help of ASCAP award winner Rodney “Lil Rod”Jones for the project. He is a talented songwriter, producer, rapper and actor.

The Chicago native started his career with a feature film debut at the age of 12 alongside Allen Payne, Forest Whitaker and Jada Pinkett Smith in ‘Jason’s Lyric’. His most recent acting roles are in a film “Teeth & Blood”, “There Are No Children Here” and ABC Crime series Missing Persons. Chef Sean has had some huge support in America with backing from areas such as The Source and Hip Hop Weekly.

Runaway also premiered on Sirius XM. Chef Sean opened at Juicy J’s sold out show over the summer during BET week alongside Erica Banks. He has had success on multiple releases and has had features alongside artists such as Jeremih and OG Maco. 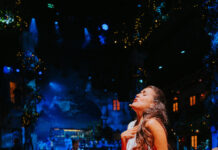