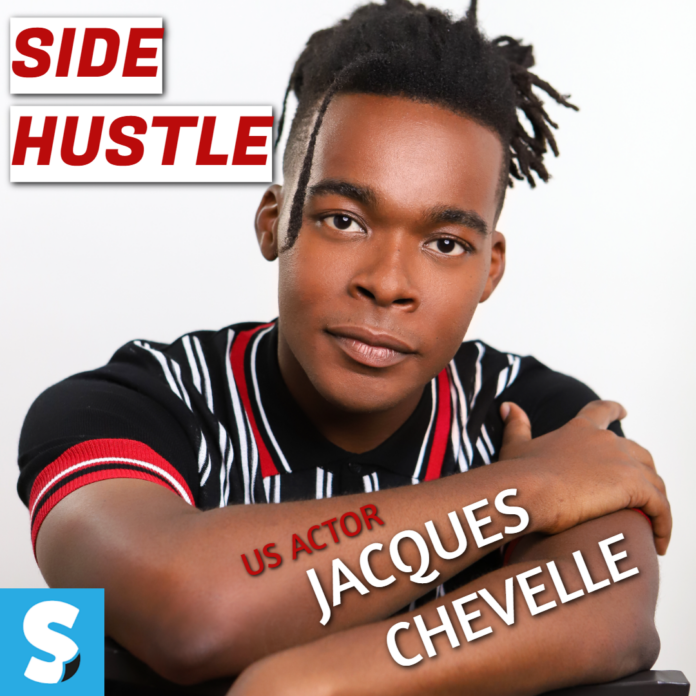 Best known for his involvement as Jaget in the US Nickelodeon Series Side Hustle; Los Angeles based Actor Jacques Chevelle has always felt he was destined to involve himself in the arts. He openly admits that he was not quite sure where that road would eventually lead him. Having begun by gravitating towards theatre in high school, he soon found his footing with his first role as lead in Shakespeare’s Comedy of Errors. Following his debut performance, he knew he wanted to pursue a career in acting. He explains how he trained at Upright Citizens Brigade, Tracy Martin, and Santa Monica College. Each school helped the actor to learn different aspects of the arts, eventually leading to a deeper understanding of emotionally led characters to performing in front of a live audience.

For those new to the show, “Side Hustle” is a story based around the lives of three kids who get into a heap of trouble when they blow up Jaget’s [Jacques Chevelle] father’s boat. What follows is a comedy about the creative jobs the trio undertake to pay back their dues. Jacques explains how his character demands a lot of his voice and physical body, so he has to be constantly on alert of how much energy is being exerted for each take. In doing so, the actor has found himself going through a learning process of how to maintain the poise of a very demanding character.

Jacques explains that when it comes to acting, he is by no means immune from nerves. For the actor, it is about learning to enjoy the work, and live in the moment. He goes on to highlight how each character is different. He utilizes meditation and journal entries in order to prep himself for his auditions and takes, in addition to the physicality of the character to help become them. For the actor, the most challenging aspect about his profession is finding new creative ways to stay motivated. “You want to stay inspired and excited, which involves digging deeper and exploring more about the characters you’re playing. You want to flush out their backstory so you have many things to pull from”.

Jacques points to his love for the exploration of work that acting offers. Finding out what makes a character tick, building the world in your mind and trying to convey that character through your whole body. An experience he feels is absolutely amazing! This being said, he goes on to point out how he does go through spates of losing drive, most notably when he is trying to juggle too many parts of his life [referencing his auditions, and maintaining his stamina required for the takes on set]. “I can have too many balls in the air and can’t give each activity the appropriate amount of focus. When this happens, I re-evaluate and try to remember what drove me to the thing in the first place”. The actor’s dream role is one that would give him the chance to work with Viola Davis! His final words of advice is to have fun with the exploration for those interested in pursuing a career in the arts and to enjoy the journey! #watchthisspace