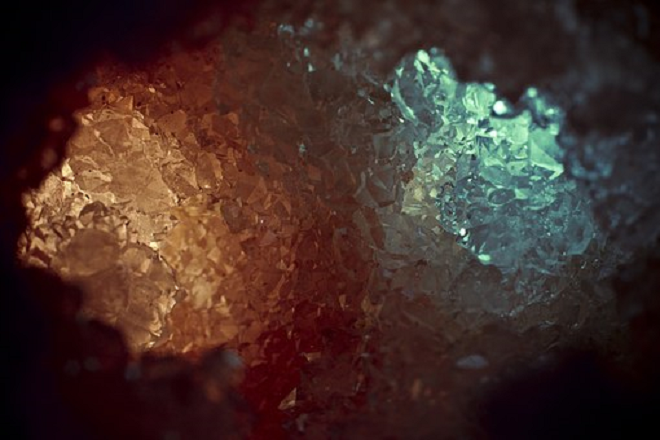 Creatures that thrive on iron, sulfur, and other chemicals have been found trapped inside giant crystals deep in a Mexican cave. The microbial life-forms are most likely new to science, and if the researchers who found them are correct, the organisms are still active even though they have been slumbering for tens of thousands of years.

NASA announced “These organisms have been dormant but viable for geologically significant periods of time, and they can be released due to other geological processes,… This has profound effects on how we try to understand the evolutionary history of microbial life on this planet.”

The microbes are adapted to survive in the extreme environments inside the Cave of Crystals, part of the Naica mine in the northern state of Chihuahua. Operations to haul up lead and silver involved pumping groundwater out of the vast underground caverns, which revealed a labyrinth of massive milky-white crystals, some reaching more than 30 feet long.

Previous work dated the oldest crystals in the cave at half a million years. Based on those calculations for the crystal growth rate, it is suggested by the team undertaking this research that the organisms they have growing in the lab had been inside their glittering cocoons for somewhere between 10,000 and 50,000 years.

“…reviving microbes from samples of 10,000 to 50,000 years is not that outlandish based on previous reports of microbial resuscitations in geological materials hundreds of thousands to millions of years old,” (Microbiologist, University of Florida)

Part of the problem is that no one is sure how long life of any kind can survive when dormant. Even sleeping organisms need food eventually or their cells will start to degrade, and scientists don’t yet know if these hardy microbes can slow down their metabolism just enough to survive for millennia.

It’s possible the organisms from Naica are eking out a living using the limited energy sources in the fluids in which they were found, Christner adds: “Perhaps they are surviving by eating dead microbes that weren’t so lucky.”

There is also a chance that the Naica microbes didn’t come from inside the crystals at all, but from the pools of water surrounding them.

In 2013, researchers in France and Spain reported the discovery of microbial life in hot, saline springs deep inside the Naica system. These modern-day microbes also get their energy from chemicals in the subsurface and are also genetically distinct from known microbial species.

The French National Center for Scientific Research explained “that the presence of microbes trapped within fluid inclusions in Naica crystals is in principle possible. However, that they are viable after 10,000 to 50,000 years is more questionable,”