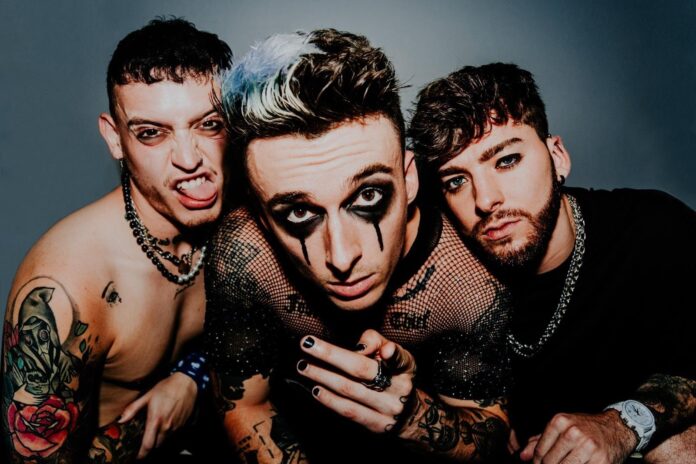 We caught up with Zack Breen (guitarist) of British outfit THE HARA who have been taking the UK by storm. The band currently embarking on their biggest headline tour to date (spanning 16 cities) commencing the day of their EP release [We All Wear Black]. The band originally forming in 2017 via the internet. Each originally musicians within their own right.

Describing their music as filthy and huge, Breen highlights how their music stands out amongst their fellow artists due to the energy that accompanies each of their songs. Breen’s personal favourite, he highlights, is “Black Soul Ceremony”. A song which originated whilst the band was in Barcelona, a riff materializing through a zoom call, which Breen put forward. He goes onto explain how when it comes to their listeners, they are keen to invoke a sense of inner confidence, individuality and spirit. A part of their social media engagement, the band always strive to build that 1-1 connection with their audience. The realization that without it it would have been much more difficult to rise above the noise.

The band explain that the main reason they are so driven is due to their peers and team constantly pushing them to be the best they can, and push past their limits. “Everyone around us is amazing and highly driven! It’s a very inspiring place to be”. However, in pursuit of the band and the visibility they have managed to achieve online, the band is open about the negative comments that have come their way. Openly admitting that at the start, is had a profound impact on how they felt about themselves and their music.

“It did affect us at the start but now it fuels us. We are confident in our ability and even more so in the amazing community we are building with our fans – you can’t let any bully in any form get you down. Believe in yourself and your worth because you are better than anyone who tries to belittle someone else for no reason other than their own insecurities”.

Breen highlights how they have all had their own experiences with mental health. Going onto explain that they (the band) always make a point to check on each other and the people around them. The idea of community is huge for THE HARA. For the boys, THE HARA is like a club that wants to shine a light on anyone who feels unseen or unheard. Pointing out the importance of talking about one’s mental health and opening up to someone you trust.When it comes to their music, the band explain how for them, the most important factor was to find people they got along with and understood theri vision and the trajectory of the band. It didn’t matter if they were from different ‘worlds’ as long as they believed in the band and understood where THE HARA needed to be and how to get there!For students looking to the music industry as a career route, Breen advises focusing on building your social media brand. “People always wanna look cool and be cool so shy away from things like shameless self-promotion and platforms like TikTok. However, what a lot of bands don’t realise is you are basically cutting off your main marketing limbs and therefore making it harder for yourself to get your name and music out there”. Going onto point out how there are tools for your business and at the detriment of wanting to look cool a lot of bands just never break through because they don’t use the platforms at all or anywhere near as much as they should. “Get on there and get your grind on”! #watchthisspace