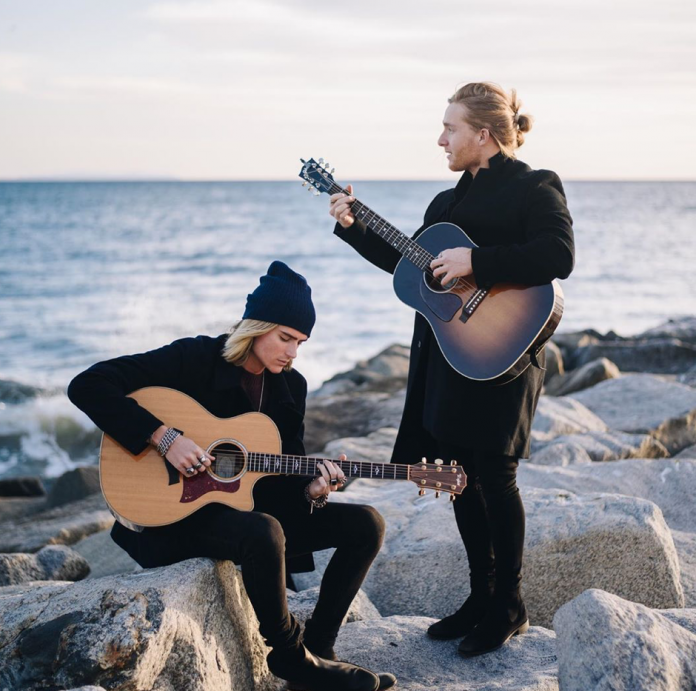 Music is your very own audible passport. An instant ticket to an alternate destination – past or present, old or new. Music can transport you to wherever you want to be – whether that place is a moment from your childhood, a fleeting feeling you experienced in adolescence, or a memory you’re yet to experience.

And when you have musical double-act VOILÀ piloting the plane that takes you there, you’re sure to be set for an incredible flight.  Following on from an incredible year, the LA-based pop-rock duo have now amassed over one-million hits on Spotify – and aren’t planning on slowing down any time soon. We caught up with both Luke and Gus to see which journey they plan to take their listeners on next.

Originating from Wisconsin and Dorset respectively, VOILÀ’s sound takes you on a journey where there are no borders – a sound comprised of influences from both corners of the globe, sprinkled with pockets of timeless literature along the way. And voila – just as their name suggests, the boys are able to take their fans away from their troubles in an instant.

“I hope that anyone who listens to our music can feel as though it speaks to them,” Gus tells us. “Luke and I have tried to bundle our experiences with loss and adversity into something that, once consumed, makes you strive to be the best version of yourself.”

This yearning to transport people to new places is a personal one for the two-piece, with the inspiration for many of their tracks stemming from a time they too wished to be anywhere else other than their current surroundings:

“[4GET] was inspired by being a Blink 182 warped tour kid caught in a Kardashian world. It’s about when your friends say let’s go out and get over the girl you lost, yet somehow it makes it worse. You can dance to Drake, you can overpay for drinks and you can stay out late, but when the girl you are missing did the complete opposite of that with you, there’s no way you’ll forget her.”

Now? That hardship is nothing but a distant memory, remembered only when fans play their tunes as they rise to the top. For those looking to follow in the pair’s footsteps, Luke says “if you’re willing to work and have the ability and passion for what you do – it’s inevitable that you will get where you want to go. The question is just one of time.”

The first leg of the journey

Every great artist’s story is born from a yearning to create. An itch that can’t be scratched until you get the ideas out of your head, and on to paper. Those early years scrawling lyrics on a napkin while catching a train to the next gig, making mental notes of melodies while you wait to catch the next bus, hours spent practicing in a space that resembles more of a shed than it does a studio. For VOILÀ, those early days were sparked by that same creative itch – but their choice of napkin? Luke chose a more readily available material, instead.

Thinking back to those earlier days, Luke reminisces fondly. “I’m from a small town in Wisconsin where there isn’t a lot of music industry but there are a lot of great stories. I fell in love with storytelling from a young age. I thought I was going to be an author until I realized I could just make my poems rhyme and then they would be songs. Much to my parent’s dismay, I used to write poetry on my bedroom walls in high school because I felt if I got the ideas out of my head, one day they’d find their way into someone else’s.”

And with their stand-out tune, ‘Stand Tall’, gracing speakers across the globe in Netflix’s Tall Girl – it’s safe to say they did. A creature of habit, Luke wrote his first ever song ‘Nothing’ on the back of a comp card while running late to class – and we can’t wait to see where the creation of his next venture will wind up next.

For many music-lovers and artists around the world – the true beauty of art comes from its power to heal. When it comes to using the things you love to get through a time you hate, VOILÀ advise taking a transformative approach. “I went through two pretty dark patches in my life,” Luke tells Student Pages. “I think the way to overcome it is to realize it isn’t like a stain on a shirt. It isn’t something you can simply get rid of in the wash. It’s more like your shadow.”

Instead of fixating on wanting the situation you’re in to improve, Luke tells his fans the best way for things to get better comes from within. “You have to realize it doesn’t get better, but you get better. You find ways to convert sadness to power, anxiety to excitement. I find that helping other people struggling is a great way to feel like you have a purpose… just simple acts of kindness made me feel like I was worthwhile.”

Losing his father earlier this year spurred Luke on to solemnize his memory through VOILA’s sound – and their goals for the future are set to do just that. “I’d like to gain enough influence to make a big difference in my pursuit to help survivors of domestic violence. It’s something my father and I worked on in my hometown city and I’d like to carry his legacy on in that.”

From there? We’ll be seeing the lads at Wembley before they know it. With their feet on the ground and their goals firmly in sight – we can’t wait to see where they’re headed to next. Their EP – The Long Story Short – is set to drop on 22nd May, so grab your passport, forget about quarantine and let the boys take you on a journey you won’t forget.

Canadian Award Winning Trio Petric on “All Who Wander”!!