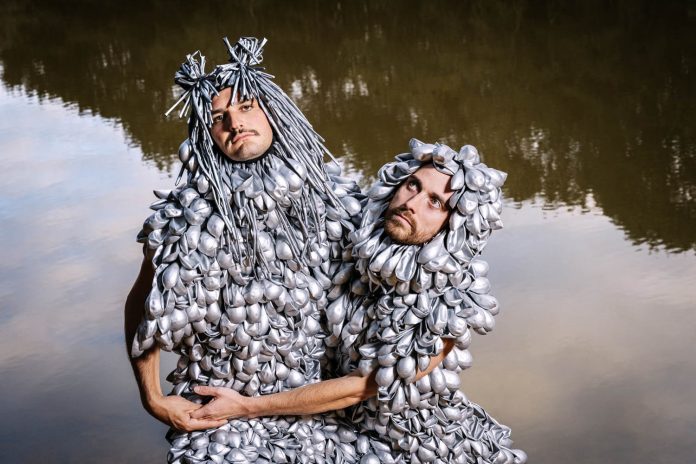 We caught up with futuristic French duo Turfu prior to the release of their new single ‘Astrale Nouba. Formed by Matthieu Souchet (LoG, XAMAN, Science Fiction) on drums and synth and Raphaël Decoster (Zlabya, Kate and Raphaël) on accordion.  With disconcerting simplicity, the pair present a daring mix of dancing accordion rhythms alongside the abstract repetitions of electro. Working with long techno crescendos, dissonant squeeze box sounds, and the birthing of confused emotions, these young musicians move between dance hall and club, in a hypnotic trance, which is simultaneously gritty and uplifting.  Souchet and Decoster’s common goal is to get people dancing and in the party mood!

Having studied Fine art at school, Raphael explains how he has always been passionate about playing music, whilst harnessing his creative visionary work to strengthen his music based appetite. “Ive always been interested by body movement as well, and how sound is tightly connected to it. So naturally, l started to play music for dance, first through folk, and more recently through electronic”. Further explaining how it became something essential for the artist, somewhere where he could express himself freely with the most direct body response from the audience. Mattieu for his part began experimenting with music at the age of 5. Highlighting how his dad listened a lot of music at home and played a lot of guitar. “I could already feel it in my body and I understood that it had to go that way. I was hit by the drums and its grounded, instantaneous and rhythmical energy”, he explains. Having had a fairly classic education, the artist graduated from the conservatory in Jazz and improvised a lot of his music. This led the artist back to his roots, and the duo have gone from strength to strength since.

The duo explain how their latest track symbolizes the story behind the band. From its mixture of electronic music and folk influenced material; the idea was born after the duo met and “jammed” with Kate Young, in a festival in Northumberland. The duo pointing out how the name originated from the album after this track, because it resumes their artistic approach. “We first created the instrumental part, then asked Kate to sing a Bulgarian traditional song on top of it. It was quite challenging, but as soon as we got into the studio, it really sounded like Turfu”. Mattieu feels the duo have lifted the bar in relation to their music through this track, through the use of the voice, most notably Kate Young’s vocals. Noting how compared to their first EP, this is a much more electronic aesthetic, which may be a a real turning point in their sound identity.

The duo explain how they usually struggle to give a clear label to their music. Highlighting how the  richness of it is that it does not conform to one box. “We could be labeled as a techno band when we play at a folk festival, or labeled as folk band when we play in rave parties. People are always surprised by this weird combination of synths, drums and accordion”. Admittingly the boys accept their artistic vision can be seen as different. Highlighting how a lot of electronic artists are coming back to the roots, using more traditional music and organic sound instruments. Turfu are part of this movement too, however choose to turn this approach upside down to create some kind of futuristic traditional music, twisting cliches and joking about themselves. Keen to have people feel free to move as much as they want when listening to their music. To party, feel emotional, silly, on trance, and above all have a sense of belonging.

The artists believe it’s important to try not to fit in. Instead to focus on what really moves you. They highlight their biggest project to date has been the production of their first album, due for release on the 19th March. The duo are currently planning their next music video, whilst working on the final steps of their album release. #watchthisspace