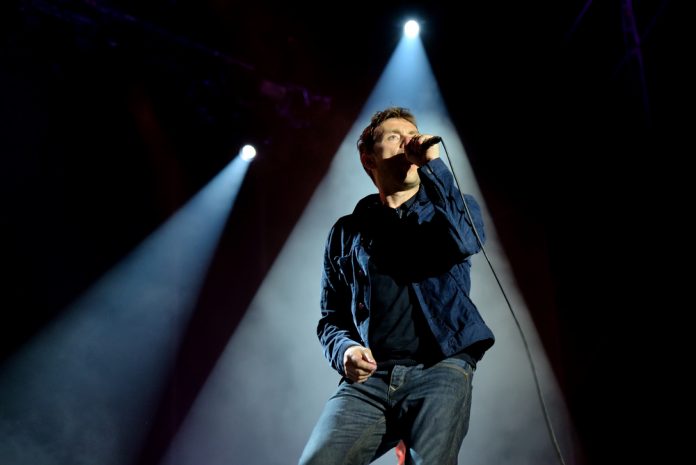 Upon entry to the SSE Hydro in Glasgow, on a cold Scottish winter night, the venue was filled with smoke that permeated through the pounding dub reggae playing over the stereo system. On the screen behind the stage only one word could be seen in dark red; Gorillaz.

Once the stadium had filled up the lights dimmed. The Gorillaz walked on the stage (or their ostensible real life counterparts since, technically, the band is animated and purely two dimensional). Led by former Blur front man Damon Albarn, the band started playing one of their deeper cuts, “M1 A1”, followed by “Last Living Souls”, the opening song from their seminal album “Demon Days”. The former song opened with the anxious chant “hello? is anyone there?!”, while the latter included Albarn continually repeating the lyric, “are we the last living souls?”. This made for quite a dark and ominous opening.

While these lesser known songs were enjoyable and introduced me to some new music, I could tell that the large crowd were eager to jump and mosh to something that they could recognize. The set did take a while to pick up the pace and really kick in but after guest rappers De La Soul joined the band on stage for a rendition of “Superfast Jellyfish”, the momentum could not be stopped. Even slower, more ruminative numbers like “El Manana” and “On Melancholy Hill” increased the excitement of the crowd, all unified in their appreciation and love of these songs.

What I found especially impressive was how well the audience reacted to the more recent songs, as if they had already reached a classic status. After the techno dance boogie of 2005 hit “Dirty Harry”, the energy of the crowd heightened drastically when 2017’s “Ascension”, featuring Vince Staples, started. This was the perfect example of the genius of Gorillaz; the ability to switch genres from sunny pop hit, to dark hip hop beats to the funky, dance floor filling soul of recent single “Strobelight” (featuring Peven Everett). Even the performance of one of their lesser new songs, “Sex Murder Party”, was filled with inspiration and creativity, as guest musicians Jamie Principle and Zebra Katz mingled with the audience while the disturbing beat played (I haven’t been able to get it out of my head since).

Of course, a concert featuring an animated band necessitates some video effects. While the band played, music videos from the songs played in the background. This really differentiates Gorillaz from any other live act I have seen. Where else would the audience get so hyped up for a song from just the first few seconds of a music video? But these videos tell a story, and in some songs I found that I was lost watching this story while the music scored it. It was truly original.

As the final song of the encore played (the closing track, “Demon Days”) a giant sun figure was lowered from above the stage just as the lyric “turn yourself to the sun” was repeated. Slowly the lights dimmed and the electronic sun above the stage slowly died out. It was an incredibly artistic way to end a show and was like no other I have seen before. Most importantly it made me do what any good concert should make the audience do; immediately listen to the songs again when you get home.