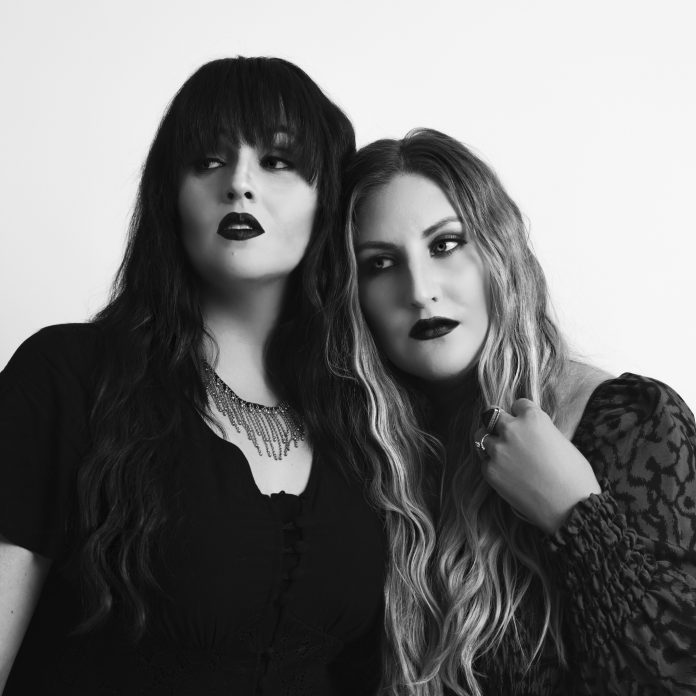 Crimson Calamity debut their hauntingly heartbreaking new single, “Ghost”. Comprised of Mallory Trunnell and Lauren Harding, Crimson Calamity is a powerhouse duo that pours their talent into a fusion of Country, Folk, Rock, and Americana.  Lauren explains how they both grew up in very musical families. “My Dad has an amazing voice and would sing to us all the time, he was teaching us songs before we could even understand what we were singing about”. Having played instruments as kids, Lauren started her journey on voice lessons at age 11. A journey that took her to  college in Los Angeles for performing arts which is where the duo’s story begins. Having taken a solid interest in songwriting, Lauren found her focus shifting away from theater.

Mallory’s journey to meeting Lauren that fateful day began with her grandmother. Listening to piano being played from a very young age left an imprint that led the artist to taking piano herself at the age of 5. Leading to songwriting at the young age of 9.  Highlighting how  Lauren and herself did not really start hanging out until after college but once they started, they did not look back. “We wrote, played gigs around LA with a few other friends and toured together before we even became a band in 2014″. The artists describe their music as ‘Wild West Witchy vibes’ with lots of storytelling, laced with intricate harmonies and organic instrumentation.

The duo point to “Ghost” being pivotal in developing the artists sound. Explaining how when they went into the studio to record;  they had one idea in their heads of what they wanted to do and it ended up being “this beast that we had to tame”.  For the duo, this was a challenge in the best way. Explaining that the song came from an idea of feeling “haunted” by someone or something that you just can’t shake. “An unrequited love, an unhealthy relationship or maybe the baggage that comes from a marriage gone wrong”. The duo were keen to produce and capture a song that was free of something that was holding them back re: peace and happiness. Co-produced with the talented LA artists Shayon Daniels and Nicci Funicelli.

For the duo, working on “Ghost” was a dream come true. Referencing their song ‘Let You Go’ off of their last EP as one of their favorites to create. They explain how they recorded the song at The Sound Emporium in Nashville and it happened to be the last session they were going to get to record with the musicians who had been with the duo since the beginning. As this would be the last time the original “band” would be captured; the gravity of that moment hit the duo just as they were about to record vocals for ‘Let You Go’ and were overcome with emotion.

We turned off all the lights, lit some candles and got very quiet. We sang the lyrics “I will try to let you go” together on one old ribbon mic, to the music our talented friends had just finished laying down and literally tried not to break down as we were singing goodbye to this era of our journey…We walked back into the control room… and everyone was teary eyed!! Not a dry eye in the room. Ourselves included. It was a rare and beautiful moment… bittersweet as it was to experience.

A Message to the Fans

Mallory points out that every song is different! The artists want people to feel included when taking in their music. Keen to produce songs that people can relate to. Whether it’s a song about heartbreak, having a fun night out, or telling a story folks can relate to. The duo want to invoke a sense of excitement, freedom to express emotion and a “part of the tribe” vibe for their listeners. For Lauren, it differs song by song. However in reference to Ghost, she points out they were keen to invoke the feeling of sadness & longing that comes with feeling ‘haunted’ through the memories of past relationships.

Mallory highlights how they are both lucky enough to have very loving support systems. Referencing their families, friends and partners having their backs which really helps. Lauren points to the support the duo get from one another; which has helped them strive for more. Having been best friends before they were a band Lauren notes no-one else she would rather be in business with.

Pushing through a Brick Wall

The duo have both experienced bullying in their quest for their dream. Highlighting how there will always be people who don’t understand what you’re doing or who don’t want to see you succeed. However, this being said, the artist feel they have become pretty good at standing up for themselves as they’ve gained more experience over the year. With the music business being an unforgiving business, the artists find strength in advocating for themselves.

Opening up around depression and anxiety, Mallory points to having grown up and dealt with depression and anxiety since early childhood. However, the artist feels stronger today due to the tight knit community from family and friends, especially her mother.  Who subsequently supported with getting the support she needed to learn good coping mechanisms as she’s grown into adulthood.

“I think as an artist where it’s your job to feel, it can feel tough to identify what is going on sometimes if you’ve never had any help in that department. One of my go-to ways of overcoming it is to write a song. In a way it feels like a release of the feelings I might otherwise hold in. Mediation, Yoga, lots of mindfulness helps keep the demons at bay as well.”

Lauren explains how she tries to practice as much self care as she can when it rears its ugly head. Finding being active, meditating, taking deep breaths and burning sage helps the artist relax when it occurs.

The duo both love social media and feel that due to the reach the platfroms alllow; offers opportunities to showcase their creatively and artistry.  Highlighting how it has helped them grow their audience during the pandemic; in addition to being a great tool to continue playing shows through live streams.

For the duo, it’s vitally important to work with people that really understand what they are trying to achieve and are just as passionate about it. Working with women on this particular project has been really important to the duo; with ‘ghost’ being produced by Gena Johnson. They explain how Rachael Moore engineered and they recorded at a female owned studio (MOXE in Nashville). Mastered by Kim Rosen at Knack Mastering.

The duo believe its important to not give up. To always be on time and be willing to work hard. To treat everyone you work with with respect and kindness; and to foster relationships and to not sign any contracts that you haven’t had a lawyer look over. They reference their biggest challenge to date being their move from LA to Nashville. Highlightinh how it felt like they were starting over in a “sense”.  The duo are currently working on a new podcast where they interview other artists about their recording process. With work already underway to produce more music for the new year…