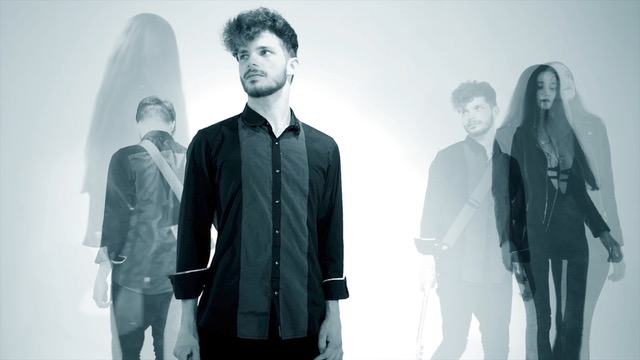 It’s so nice to finally have something out there to show people what we’re about. Before this, the only way people heard what we sounded like was at gigs. – aMANDA mAY (sISTER pSYCHOSIS)

Comprising songwriter & vocal powerhouse Amanda May and guitarist wunderkind Chops, the UK-Canadian duo transcend borders to make sparks fly on their first studio outing together. Formed through a series of chance encounters, we caught up with the duo following the release of their latest single Beside Myself . The duo point to their music as a sassy, messy rock n roll with pop undertones, in addition to 90’s and blues influences. With emphasis placed on electronic backing tracks to bring something new and unique to the table.

A release featuring Alan McGee. The duo explain how Alan’s involvement has been a major step and dream come true. Amanda explaining how the lyrics are an inspired interpretation of nights out partying in London. Best described as a “sassy, sensual track about craving adventure”.

Amanda explains how her parents had classic rock blasting in the house before she could walk. Attending her first concert at the age of 4 with parents in tow, she instantly fell in love with music. From this point she wrote lyrics and sang for the joy of it. Following an audition at graduation she realized she may actually have some talent, and her path was clear! Chops grew up in a musical household. With his dad being a producer, he found that he naturally gravitated towards music with his first endeavour being a drummer, with a confidence of rhythm from a very young age!

Tthe duo’s favourite release to date is “Into Your Memory”, whilst holding onto a yet to be released track “Mine to Kill”, offering a blend of both artists strengths in their respective roles. The duo are keen to have their listeners identify with them when listening to their music. To feel something and see them for the unique and creative artists they are! For Amber, whether people love it or hate it is irrelevant as long as they have an opinion on it. “For me, there’s nothing worse than listening to something so boring that it doesn’t invoke any feelings at all”. Referencing their mentors, the duo note how they have had some great music inspirations along the way to give them the confidence to follow their dreams.

The duo open up about dealing with anxiety in the past. Amanda highlighting how as she always been quite in tune with her emotions, she tries to not let issues fester in the dark. “I think that’s of huge importance when dealing with mental health issues. Just talk. Write it out”. Noting how a lot of what they have accomplished has been down to social media. Highlighting their start of the journey in landing their record deal was via being visible on social media circuit!

Finding influence through the legendary Zeppelin, Stones, The Stone Roses, The Beatles & Oasis. The duo find finding the right musicians and producers to work with is vital. Amanda explains how she felt like her career was on hold until she found her team. Highlighting how it takes a lot of work and compatibility. “You’ve got to have the same work ethic and it’s rare to find people in any industry that put their heart and soul into their work the way our producer Pepper does. Same with Alan McGee. Total hustler”.  Going onto note how the music just flows when you have people like that supporting you.

The duo point to admiring your strengths and embracing your weaknesses. “If you have skills to utilise, go full force on it and if you have room to grow, sit back and take your time with it”. Highlighting how you will eventually level out into a well rounded version of your former self and find comfort in being able to overcome what you once thought was impossible. The duo currently have another release due out on the 29th of January ’21, with plans to get back into the physical studio as soon as lockdown allows. #watchthisspace

Irish Artist Aimée on her latest single “Just a Phase” &...