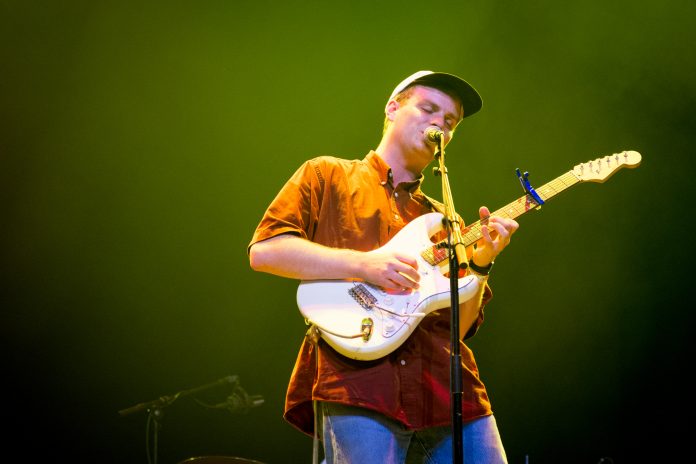 Predominantly self-shot, it depicted the indie songsmith’s tour of China and Australia as well as the Brooklyn-based mastering sessions for his then-upcoming commercial breakthrough – Salad Days. Peppered with vignettes of sardonic advice for aspiring music-makers – delivered directly to camera by a deadpan Mac – the ‘Macumentary’ perfectly encapsulated the essence of the singer’s screwball persona and the soft-rock stylings of his sound; reaffirming the admirations of his then-cult following and garnering a new legion of devotees.

Three years on and with a third studio album – This Old Dog – providing the basis for an international tour; the same carefree and characteristically impertinent charm remains a hallmark of Mac’s live show, which arrived in Bristol for a sold-out date at the O2 Academy.

Bathed in the soft purple and pink hues of the stage lights, the young crowd – all dungaree and dad-cap clad – hums with a palpable sense of anticipation. Mac’s band emerge onto stage one-by-one, each of them introduced by a pitched-down voiceover that overlays a gooey instrumental. The room is catapulted into a frenzied uproar with the side-splitting entrance (‘25% Italian and riddled with disease’) of the ‘man of the hour’. Cradling three cans of Stella and revealing a further two from the back pockets of his jeans, Mac lumbers into view, lining the drinks neatly atop one of the amps. The opening synth-line of On the Level is barely heard against the clamour of the crowd, who are propelled into a singular, swaying mass as Mac and his band segue into the jangly guitar-tones of Salad Days.

As the evening progresses – and the cans adorning the amp are slowly diminished – the set becomes increasingly more free-form. The gaps between songs are filled with casual conversation amongst band members and Mac’s off-the-wall musings that are at once hilarious and entirely arbitrary. When an audience member throws Mac a rose, he considers it momentarily before catapulting into a madcap rendition of Seal’s Kiss from a Rose – his pianist and bassist providing seemingly improvised accompaniment.

Under different circumstances, or in less proficient hands, these extended lulls and unfiltered tangents may promote restlessness or disinterest amongst the crowd; but it is a testament to the talents and charisma of Mac and his ensemble that the room is never anything less than stupefied.

Over the course of an hour and fifteen minutes, they rattle off the favourites; the strength of Mac’s vocals showcased by particularly emotional renditions of One More Love Song and My Kind of Woman, before the gently swaggering crowd is once again sent into furore by the irresistible grooves of Freaking Out the Neighbourhood.

The set is bookended by Still Together, which morphs from its usually compact form into an improvised mini-odyssey. Taking their cues from the riffs of Andrew Charles White’s lead guitar, the band perform a surreal, genre-spanning medley – initiated by Mac’s passing of the mic to drummer Joe McMurray, who sings an off-pitch but entirely enthralling rendition of Red Hot Chilli Peppers’ Under the Bridge. From there, Mac climbs atop an amp-stack – conducting the chaos from his heightened platform – as his band members swap instruments at will, segueing between covers of Blink 182 and Black Sabbath, via Blue Oyster Cult and The Darkness.

It is a fittingly barmy ending to a night defined by the amusingly unexpected and, as Mac and his crew exit the stage to ripping applause, chants of ‘one more song’ ripple through the masses. Exhausted, bemused, utterly enthralled, and ultimately hungry for more – they have witnessed a performance of sheer exuberance and talent by a one-of-a-kind showman at the peak of his powers.

US Quartet 5WEST on their latest single “Last Time”