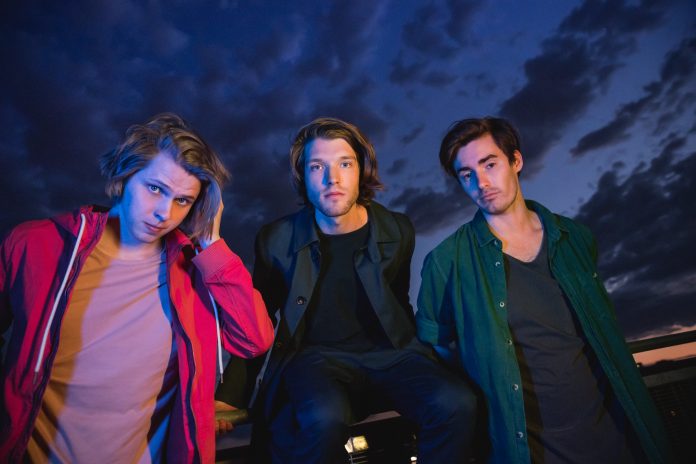 Standing out and making a dent on the music scene can be pretty tough. With only so many tonal notes of the musical world to choose from, how is it possible to create a sound that is fresh, unique and gets its listener reared and ready to go? Some artists nail this process with ease, making it look as effortless as scrolling through your newsfeed instead of working on that assignment with the imminently-pending deadline looming. Student Pages Magazine spoke to Mansionair’s drummer, Alex Nicholls, on how the Sydney trio make this process appear effortless and how they continue to create an electro-pop yet soulful sound which sets them apart from many alternative artists.

With their 2017 single ‘Easier’ offering a unique change in pace to typical tracks on the market, we wanted to know how Mansionair found the creation process after making their initial dent on the music scene. ‘Writing ‘Easier’ was quite a simple process,’ Drummer, Alex Nicholls, tells us. ‘We just spoke honestly and it worked out that people really responded to that. ‘Violet City’ was a more drawn out process because of certain expectations that now surrounded us.’ The pressure to succeed after an initial triumph can sometimes create a wall between any band’s creativity and success. Nicholls stressed to us that, in such circumstances, it is vital to retain dedication and honesty in your creative work: ‘It really taught us to persevere with a song until it was complete. The song was originally inspired by the time we spent in LA, where we wrote the song.’

Of course, hard-work, determination and perseverance remains the key to any creative process. But Mansionair’s success is down to much more than simply perseverance. Their sound separates them from the generic influx of most millennial music genres, forcing the music industry to accept their own style of sound which eschews mediocracy. Though their sound can be labelled as Electronic/Pop, the soulful yet up-beat vibe to their songs makes their genre undefinable. In fact, Mansionair never really ‘chose’ Electronic/Pop as their target sound: ‘We all like electronic and we all like pop but we also like a million other genres which have made its way into our songs,’ Nicholls says. ‘We kind of just ended up here.’

Though the synthesis of multiple genres and a new musical tone can be said to be the key to any musician’s success, Mansionair’s undefinable and hybrid band-production status likewise stirs intrigue. Nicholls states that their unusual musical status may well have played a key factor in their stand-out image: ‘I think the fact you can’t quite define what type of project we are makes us stand out. Being a half-band, half-production group means that we can draw on a lot of different areas – both live and in the studio.’ While we can often think of the term ‘grey area’ as something ill-defined, Mansionair’s ‘grey area’ appeal is totally the opposite. Rather than conform to rigid categories, the band instead shatters these moulds. Their hybrid band-producer status once again comes to the fore, showing that ‘being somewhere between a band and a producer’ can make artists stand apart from the fleeting masses. Nicholls continues that: ‘getting more specific makes the whole thing confusing and we’ve seen the look on peoples’ faces as we try to describe in detail what we sound like. That kind of grey area is what makes us stand out.’

Musically, the band creates stand-out tones and a vibe that speaks to the soul. While creating unique sound can often be a challenging process, Nicholls says it is something that should always remain honest and true: ‘Our biggest challenge has been figuring out how to work together, accommodating each other’s influences and personalities is not always easy but the result is something really unique.’ Indeed, Mansionair seek to invoke honest feelings from their listeners through their unique infusion. As the songs are ‘designed to be interpreted in many ways’, Nicholls tells us that the band’s mission is to make their fans ‘connect more’ rather than feel something which lacks integrity. The same can be said of the band’s view on the music industry: ‘I think the music industry needs to chill out a little bit.’ In a world that is focussed on measuring success, Nicholls states that the music industry should ‘let people just be artists and not worry about if they are “successful” or not, because that means different things to everyone.’

Indeed, how can success be categorised by any one person when it is such a uniquely defined concept? It appears this is a recurrent theme in Mansionair’s mission and overall vibe: staying true to your own uniqueness and sincerity. Anybody looking to follow in the band’s footsteps should, Nicholls says, ‘make sure they are doing something because it makes them happy’. He continues that goals should only be followed if it: ‘makes you or someone important to you happy. Don’t make too many decisions based on a grand future because the future never really comes. It’s better to just work your hardest in the here and now.’ He also tells us that in order to succeed, it is important to find people in the music industry that create or a sound similar to the one you desire to produce: ‘It’s always nice to find people with similar mindsets so that you don’t feel isolated and can bounce ideas off. I guess that’s true in any industry.’

In relation to the band’s ever-expanding schedule, being caught in the middle of media attention while adhering to chronically busy schedules has the potential to hinder any band’s success. This is simply not the case for Mansionair. Remembering the importance of finding time for ‘normal’ activities alongside their musical passions remains a crucial focus for the band: ‘It’s important to retain a normal lifestyle outside of touring and hold on to your hobbies,’ says Nicholls. ‘We all play sports: Lach plays basketball, Jack swims and I play soccer. Besides that, living normally off-tour is in itself a hobby.’

Of course, a huge factor in succeeding in any industry lies in support – be that from fans, influences, friends or family: ‘We are all very lucky to have come from such amazingly supportive families who all pushed us to pursue music.’ Nicholls continues that key figures from your past can likewise play a pivotal role in inspiring individuals to strive and achieve their goals: ‘Each of us has had a few really important teachers who have had a huge impact on the artists we are today.’

While Mansionair have many musical influences, the band’s drummer states that inspiration can be drawn in many shapes and forms: ‘There really are too many to write down. It varies so much from Radiohead, The National, Jamie xx and Miles Davis. We also draw inspiration from designers and directors and chefs etc.’ The band’s likeness to their influences certainly adds to their popularity. But, with a noticeable increase in the popularity of the Electronic genre becoming more evident throughout 2018, Nicholls says that this may be down to ‘a reflection on the increase in popularity of technology.’ He continues: ‘Both go hand-in-hand. Having said that, both date quite quickly.’ Electronic music, he says, ‘is heavily reliant on more of an experimental underground scene so that it’s continually evolving.’ Remembering your best achievements, he says, can likewise assist in the process of creating new and exciting sounds: ‘besides ‘Easier’, for being a real turning point sonically for the band’, Mansionair’s currently unreleased song ‘Heirloom’ stands out as one of their firm favourites. They plan to release the track soon and hope it will appeal to their fans as ‘it was a really simple and honest process to finish it.’

With the band currently storming the alternative scene and leaving us wanting more, we wanted to know about their plans for the future. Nicholls told us that: ‘right now, we are working on being a touring band. We have moved over to the US so that we can be available for more opportunities – whether that’s shows, writing or both. Our main goal,’ he says, ‘is just to release more music. It’s all there, we are just waiting for the right time to share it.’

And we can’t wait to hear it.