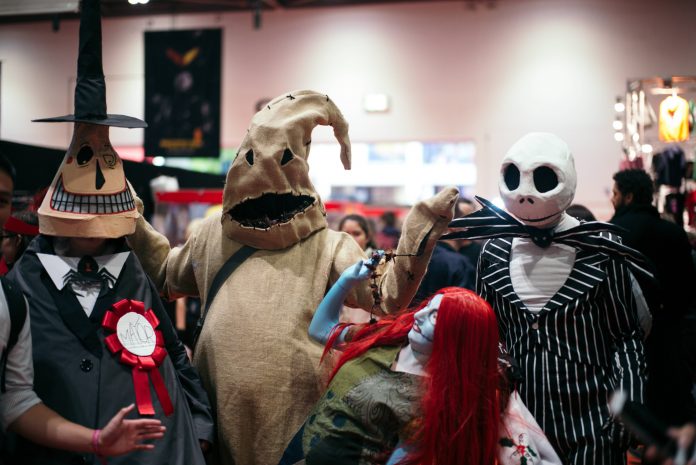 A pale, scruffy man sits at a table, peering into a sandwich. There’s half an hour left until closing time, and the three adjacent tables are vacant. Opposite him sits a green creature, a cross between a bunny and a piranha. It looks blankly into the middle distance. Both are worn out. It’s been a long day at London’s Comic Con.

Twice a year, tens of thousands of pop-culture devotees flock to the ExCeL Centre in Newham, a decked-out warehouse which sprawls along the Thames from Custom House to Prince Regent. The event is straightforward in its objective, and ambiguous in its execution. It hosts, according to its website, “the only UK based shows that bring together such a broad scope of popular culture categories including; Movies, Gaming, Comics, Anime, Television, Gadgets, Clothing and Toys.” 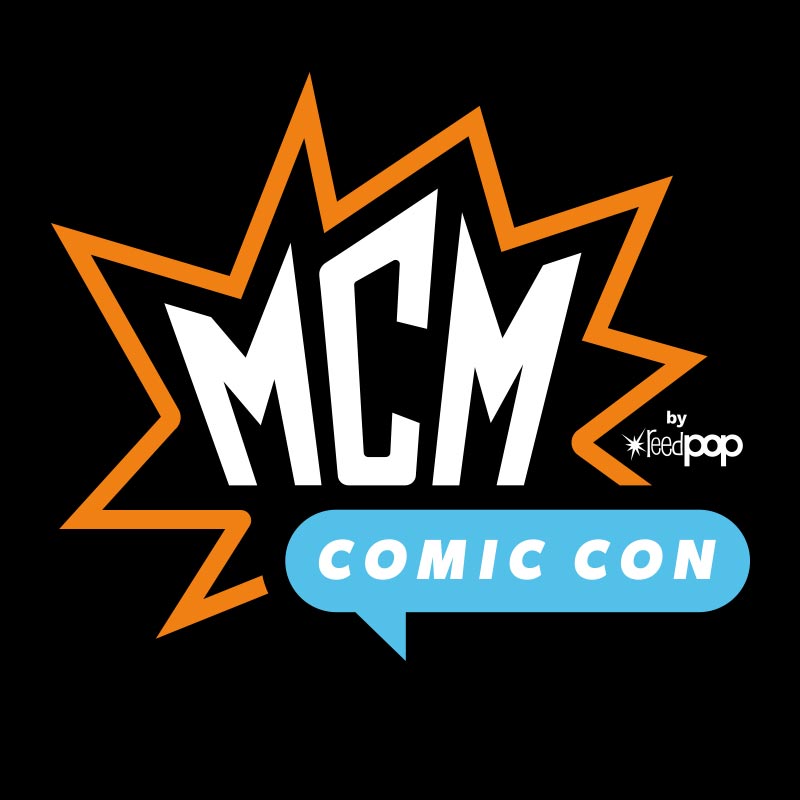 In practice, it’s harder to define. Thousands dress in the costumes of their favourite fictional characters, a mass, directionless ensemble of pop-culture simulacra attending panels, browsing for merchandise, and lounging in the heat.

When I arrive at midday, the outdoor perimeter is like the barracks of a flamboyant paramilitary cell. Thousands parade beneath the burning sun, brandishing massive pink plastic katanas, replica arc blasters, and back-mounted plasma cannons (“actual guns,” mercifully, are banned, according to the “MCM Comic Con Costume, Weapons & Props Rules”). Across the Thames shore looms Comic Con’s opposite, an abandoned factory with no colour left in its battered facade.

Not all the attendees are armed. Batmen stalk the facility, slogging through the sweltering heat. There’s a reason Gotham City isn’t in Iran. Inside, a trio of pastel-coloured cats writhe on the cold floor, “because we’re cats,” they explain. A tribute to Monty Python’s The Holy Grail moves through the crowd in tight formation, beating coconuts to a galloping rhythm in lieu of real horses.

What’s the point of this event? To one man dressed as a “custom character,” a technicolor 8-bit drag queen, Comic Con is the “least judgemental place on earth,” a place to openly “cosplay” in outfits the public eye rarely permits. Another came because her kids love superheroes, though she evidently isn’t much of a geek herself—she’s most enthusiastic when she tries to sell me cheap travel.

The security are also in on the fun. A bouncer reminds attendees to declare their “deadly weapons,” but only so they can join the appropriate queue. Paul, a hefty bloke in a high-vis jacket, tells me it’s a joy policing the legions of superfans, because he’s one himself. He’s actually in cosplay “as a security guard,” he jokes.

Meanwhile, minor celebrities sit behind black counters, cogs in comic con’s autograph-industrial complex. Actor Paul Blake sits underneath a large poster of his most famous character, the green bounty-hunter-aardvark Greedo, who features in all of 76 seconds of Star Wars: A New Hope before Han Solo shoots him dead, unprovoked. George Lucas released a graphically rejigged director’s cut in 2004 in which Greedo, not Han, fires the first shot, missing at point blank range, which sparked an impassioned debate—still raging—over who “shot first.” 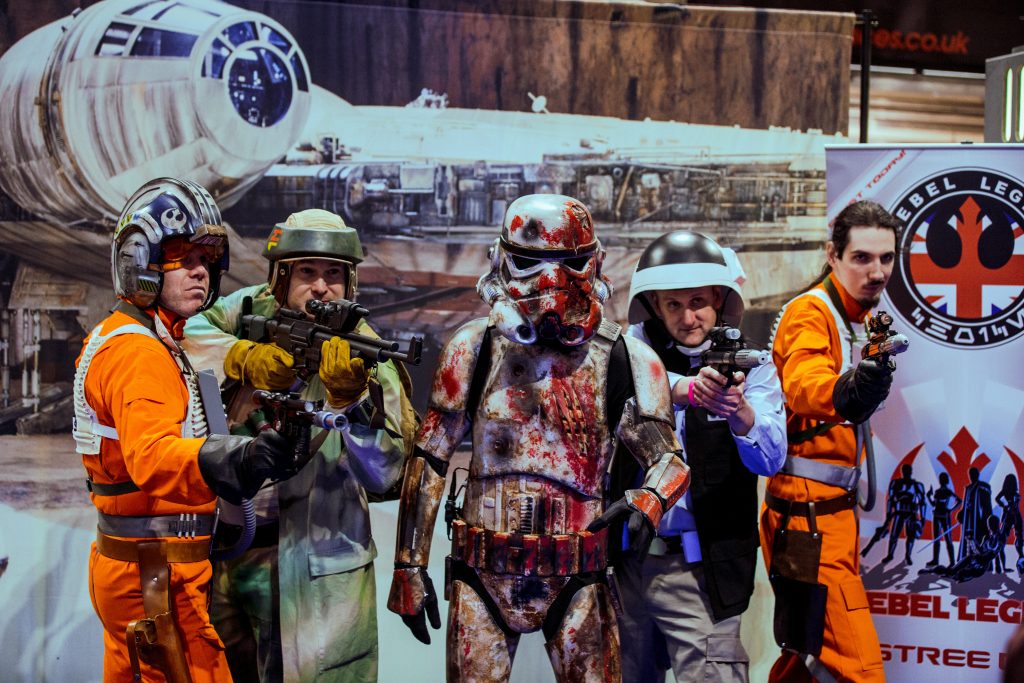 When signing, Blake fields the same question, endlessly. Asked how many fans inquire whether Han shot first, he tells me “All of them.” I press for a resolution to the ageless dispute. “In the original script, all it said was ‘Han Solo shoots the alien,’” he explains. So he’s just grateful they gave his character a name. “I played the alien in Star Wars” doesn’t get you a signing post at Comic Con. What else is he proud of, besides Greedo? He goes on to recount his illustrious theatrical career, but deflates when I ask, as if I didn’t listen to a word he said, “Can I ask one more question about Greedo?”

Most, it appears, are here in the throes of a broad cultural movement, a focal point where disparate strands of fandom become amicably entangled. Hundreds gather outside watching as a smattering of topless men headbang to a live metal band, and it’s a foregone conclusion—probably correctly drawn—that the majority of the attendees enjoy the genre. Yards away, radical feminist authors discuss character, style, and Martian dystopia.

Meanwhile, £5 pizza slices litter the floor at the entrance to a cosplay variety show, as addictive as it is ominous. A host mumbles introductions, and people dressed in costume bound out and perform, in character, each to equally rapturous applause. The Grinch snarls, and Wonder Woman duels an equally glamorous rival. For about seven seconds. Dicehead, a man with a large dice for a head, thrusts his hips menacingly, daring the audience to know who he is.

And then, imperceptibly, Comic Con ends. As closing time draws nearer, the crowds shuffle out, and the celebrities file back into obscurity. Thousands of Deadpools, Pikachus, and Pickle Ricks pack the trains and return to their uncostumed lives in Brighton, Hove, Northumberland, and Edinburgh. A man sits across from a woman dressed as a razor-jawed bunny at a now empty table bank. They too will soon be heading home. For humans and bizarre animal-concoctions alike, pop-culture paradise is once again shutting its doors. Until October.

I'm a UCL graduate and have recently returned from teaching in Italy. I love to write in all its forms, and have written musicals, comedy sketches, news reports, investigative pieces, short stories and TV pilots.