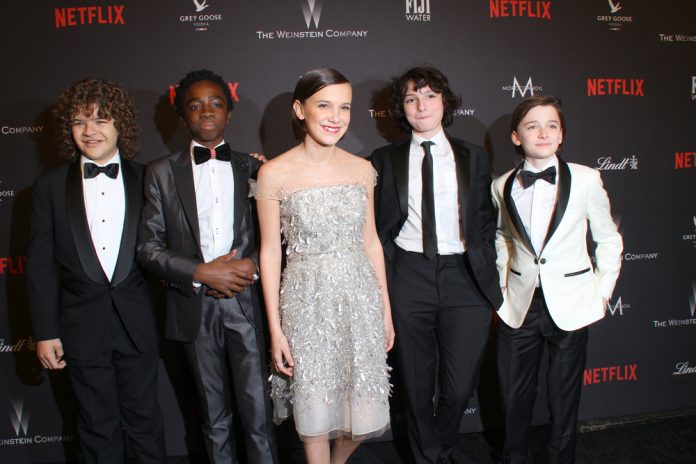 Perhaps the most anticipated films of this year are the upcoming Justice League and the fresh release of Blade Runner 2049, yet for me the biggest prospect of 2017 was Stranger Things 2 due to the major success it had within its first season under Netflix. Much like last year, Stranger Things has taken over social medias and reinforced itself as one of the biggest television phenomena of the last decade. After a 9 hour binge-watch and a couple of days to recover, my review is now ready!

The Duffer Brothers got off to the perfect start as they reminded us exactly why the show is so adored due to the reintroduction of its exceptional cast and 80s theme which makes all teens say, ‘Why didn’t I grow up in the 80s?!’. The casting is perfect in every single role from the very promising Finn Wolfhard as Mike, to newcomer Sadie Sink as the freshest member of the young club –  a club which is very reminiscent to the Losers Club from ‘It’; another group of nerdy heroes who fought against an unimaginable evil. So many aspects were executed flawlessly aside from its cast, such as the design of our new villain which premiered in episode one – an iconic scene.

This scene is one of my favorite in the entire season due to the first glimpse of the new terror, as well as being indulged in a pure homage to 80s genre-films. The scene begins with our terrific team in a colourful arcade enjoying themselves in this seemingly faultless life, until Will falls into a truly horrifying nightmare state where he is separated from the real world and is forced back into the Upside-down. There we are greeted with a monster which resembles a crossover between the Cloverfield monster with its long eerie limbs, and the notorious Xeno from Alien due to the elongated skull and black colour. I much preferred this villain to the Demo-Dogs as Justin fittingly named them, as they mirrored the Demogorgon from the first season merely with added limbs. Stranger Things can exploit a universe which can include any monster or creation they wish, so it was a little disappointing to see the devil dogs as the main opposition in this season.

Another great aspect was the character development as all the cast seemed to mature together into even better individuals – the one I appreciated the most being Steve as he has grown from the typical high school bully, to a great addition to the heroic team as well as becoming a fan-favourite. Alongside Steve, Eleven and Jim Hopper showed great progression in their battle to preserve their new Father-Daughter like relationship and keep Eleven out of the wrong hands. Yet as expected she becomes infuriated in her containment situation and aims to escape and reunite with Mike – the change in Eleven is good, but it results in one of the worst episodes in the collection.

Episode 7 is an agreed-upon disaster. You can rake through as many reviews as you wish, and they will all consist of the same opinion that the episode must be complete filler, as it doesn’t fit the tone of the series at all. Scoring a low 6 on my scale, we are given a hashed-up attempt of an Eleven/Jane side-story and it completely sucks due to its displacement and general dullness of the episode. The story doesn’t even go anywhere promising as it starts and ends all within 50 minutes – Eleven finds her ’sister’, attempts to kill a man who once helped the experiments on them, and finally she backs out and returns to Hawkins, Indiana. It annoys me that the writers behind this second season felt they need to include this as it is so clearly made to act as a run-time addition, rather than offer anything to the main storyline.

Aside from the couple of negatives, the series is excellent due to its fresh creature design, including a very promising new villain, and continuation of the first season’s excellence – the cast, the original concept, and the sinister tone wrapped up in a brilliant 80s theme. Despite the murky middle, the second season is beyond enjoyable all the way up until its epic conclusion where we get to witness a gripping final battle. The future for Stranger Things looks very promising as it has been renewed for another two seasons with the Duffer Brothers stating that the project will be retired after its fourth instalment.

Artist Jamie Scott on “How Still the River” and playing to...