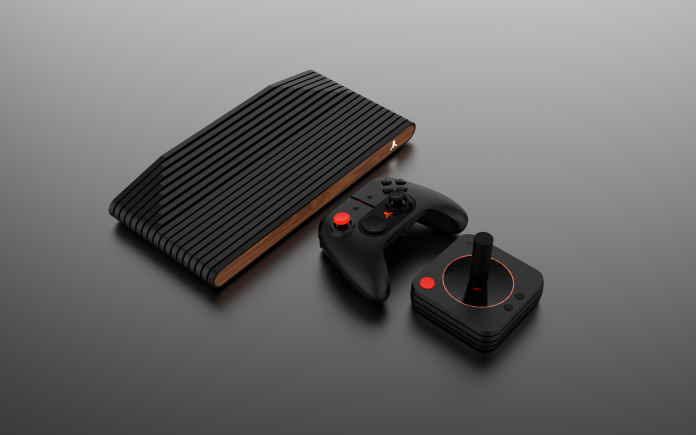 To all gamers, this is no joke. Atari have just revealed more details about their new console after over a year of secrecy and speculation since its reveal. Atari are back with a bang.

After a shaky history for the brand and company behind classic hits such as Pong (1972), Asteroids (1979) and Centipede (1980), Atari has pinged back onto the gaming scene. It was announced on June 2017 that Atari would be developing a games console and since then, many have theorized about what that console may be. It was only revealed at the 2018 Games Developers Conference that Atari’s new console, the Atari VCS, will be available for pre-order come May 30th 2018.

So what exactly is this console and, why should I care? I have a PS4. Well, Atari are taking gamers back to the 80s with this new console. The console itself is designed to run both classic games and modern games alike, propelling it into competition with the current leaders; Xbox and Playstation, while offering something to gamers that those companies fail to do. Sorry guys, but the retro game coverage on your online stores simply don’t cut it. Not only that, but the Atari VCS will be released with the Atari Vault, a collection of over 100 classic video games such as the three mentioned above.

The console itself hits home with some decent hardware as well as some features not offered by current consoles. The Atari VCS is said to include a classic joystick 80s style controller pad, a modern style controller pad and run games in 4K resolution at 60 frames per second (60fps). If that isn’t enough to get you excited, the console is said to support a variety of modern games from current games developers. As well as this, it is confirmed to have a custom AMD processor with a Radeon graphics chip and it will run on a Linux Operating System. Could it get any better? Atari have also confirmed it will have a voice control feature. What this feature may be is open to speculation by fans and rival developers alike. While exact specifications are not yet released, Atari claim that it will bring a PC gaming experience to the Television; coining it the first real Video Computer System of its kind.

The only real bad news thus far about the console is the shipping date. With the pre-order function starting this month, gamers won’t be able to get their hands on this piece of kit until the Spring 2019. With this slight timescale setback aside, Atari seem to be catching up with the times. As the grandfather of modern video games, it is about time they came back to the market they pioneered.

What makes a powerful Horror Movie

Isle of Wight band As We Leave on “Stories We Tell”