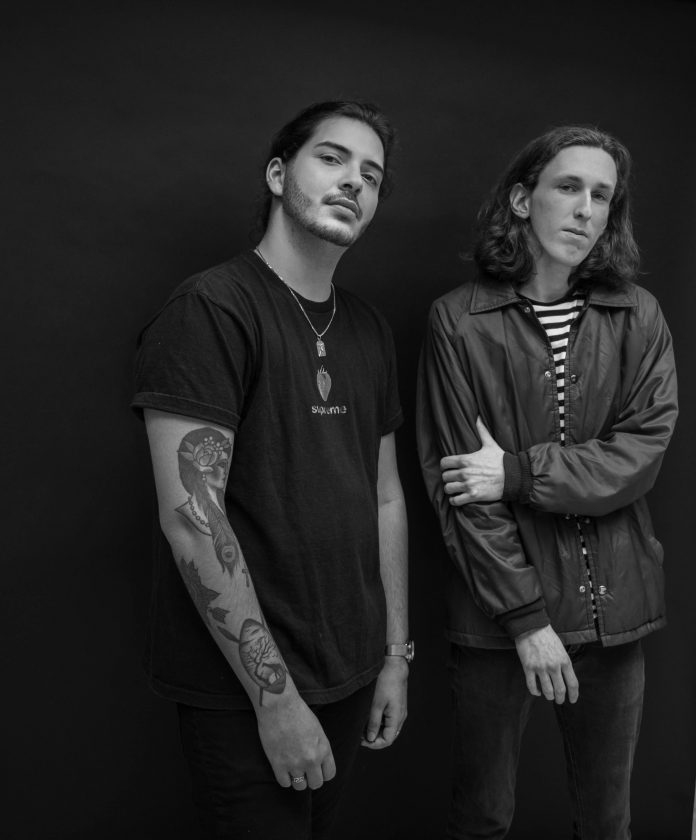 Heavy, melodic and ‘kind of weird in places’, fast-rising electronic duo UHURU continue to trample all that stands in their path with their distinctive sound.

Comprised of Connor Daniel and Robert Jones, the once-four-piece downsized to create the experimental end-product they’re now renowned for – a fusion of dance, electronica and R&B.

The result? The freshest and most vibrant-sounding tracks around.

Originally hailed for their electro-house and Chase and Status covers, UHURU’s sound now knows no bounds. In fact, every aspect to the pair’s sound, image and style resonates with this notion. Right through to the band’s name – meaning ‘freedom’ in Swahili – each part of their aesthetic foundation is a testament to their unique, eclectic vibe.

Born in Kenya, Connor took familial inspiration for the duo’s name. “I’m really proud of my Kenyan roots,” the 22-year-old tells Student Pages. “It just seemed natural to go with a Swahali word – and luckily, Rob liked the sound of it, too.”

While Connor’s early sound verged into dubstep, he later developed as a gifted pianist. This, paired with his soulful delivery, is what sets the pair apart from the general influx of dance and electronica tracks – something he continually strives to develop.

“I’ve introduced a Mallet Kat into our set – a huge electronic xylophone that can play any sound you program onto it – so that’s super fun to play on stage!”

Playing live, and – more importantly – keeping it fresh, is certainly a passion the duo share. Welsh instrumentalist Robert agrees that their “live-set is pretty special. It’s something we’ve been investing in for the last two years, so we’re at a really good point. And we just love playing live – so that certainly helps.”

Inspired by creating music that urges its listener to move to the beat, the duo have always made music to dance to. “It’s what I enjoy listening to most,” Connor highlights, “whatever the genre.”

In fact, creating music that makes its listener feel a magnetic urge to move their feet is a part of the duo’s genetic makeup. “My grandparents were in a band, and so was my mum, my aunt, and uncle.” And while they weren’t all in the same band, Connor has had a long line of musicians ahead of him. “I’ve got the type of parents who’ll complain when they don’t hear music blasting from my studio, and you’ll find them at almost every gig.”

Likewise, Rob’s parents have always been supportive of his passion for music, something the pair agree is a huge motivator in pushing forward. Because, as Rob aptly puts, “you always want to make your parents proud.”

Though the pair share a love of family as a main musical aspiration – their influences differ somewhat tremendously.

With Robert idolising the likes of Nile Rodgers, Noel Gallagher and The Killers, Connor takes inspiration from sources of soul. “I grew up on Michael Jackson and Earth, Wind and Fire. Since then, I’ve come be a massive Hip Hop fan, and I’d say 90% of my Spotify is the latter. I admire real wordsmiths like Kendrick Lamar, Kanye and Tyler the Creator for their skill with lyricism.”

Ready to liberate your mind, body and soul, their neon-tinged beats take as much outward as inward inspiration. As anybody growing up can affirm, as your age accelerates in digits, so do your problems. And while having 99 problems – but a bitch not being a single one – makes for a great lyric, so does having trials and tribulations in the area of romance.

“When I was younger, I’d always put myself in someone else’s shoes and hone into other situations – avoiding creating lyrics about real life. The older I get though, I find myself writing way more about my own experiences. I guess that comes with age (and more girl problems!)”

Just like the musicians they admire, they too have big plans for the future.

“I’m in my home studio almost every day so I’m constantly writing and producing new material for us. Once I’ve made a demo that we really believe in, we take it to our pals at Numen Studios for a mix and master.”

Excited at the prospect of continuing their touring aspirations, UHURU likewise have their eyes set on a long string of gigs.

But when they’re not creating quirky sounds, playing the Mallet Kat, or producing music that makes a whole room feel a magnetic compelling to move their feet, the pair have some pretty typical hobbies.

“I like to cook,” Connor tells us. “I’m sure Robert would testify that, while we were at Uni, there were some pretty questionable creations – but I find cooking relaxing.”

And like the rest of the nation who have the itch to find ‘their type on paper’, Rob too delves in equally unmusical shenanigans in his free time – binge watching Love Island.

But it wasn’t just a love of cooking that Connor realised during his time as an undergraduate. A major key to success is often finding people in the industry that are akin to you, your style, and your craft.

The UHURU artists tells Student Pages that this is an incredibly important factor when choosing which avenue to venture down – in whatever industry that may be.

“This really came to light whilst I was at Uni. I was on an Electronic Music Production course, surrounded by like-minded producers I could really bounce off. It was hugely important because it really developed my own production by seeing how other artists work and learning new techniques.”

For those wanting to follow in the duo’s rapidly evolving footsteps, they offer simple – but equally prevailing – guidance.

Sometimes, it really is as simple as just being nice.

“This is going to sound really dull, but – be nice. I’ve had this conversation with loads of people in the industry, and just being nice goes a long, long way.”

Though, while Rob attributes being a decent human being to the band’s success, he’s indicative of ways the industry can improve for future generations.

“I think the industry needs to put a bit more faith in its gut instinct when it comes to young artists. A lot of their decisions are based on statistics, which I suppose is a necessity in this day and age. But it would be nice to think that every so often, they just went with their gut and took a risk on a younger artists.”

So, whether you’re looking to make it as a musician, actress, chef, or astronaut – always follow your gut, because you don’t know who might be listening, or who’s ready to follow theirs.

And above all, be nice.