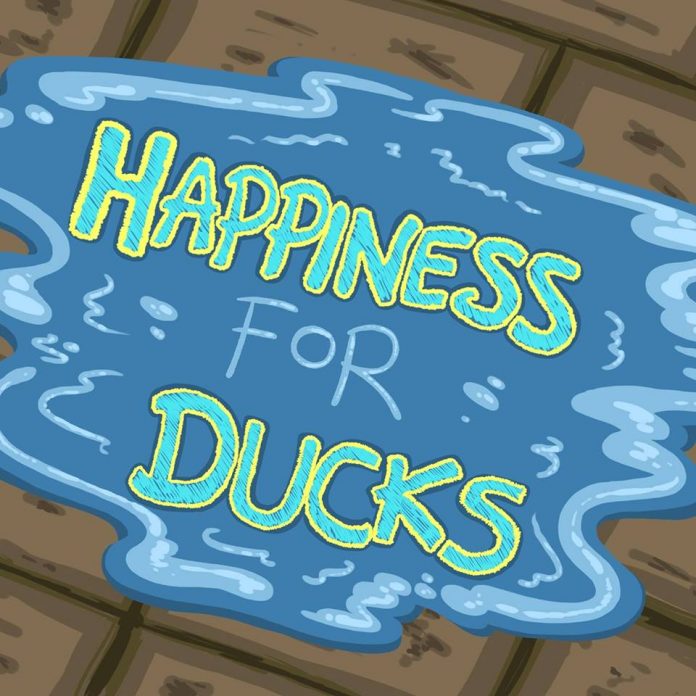 Happiness for Ducks is an indie musical made by film students and an award winning animator, with members from all over the UK, including actors from Guilford and cinematographers from Manchester. Here is an interview about the film’s process with script writer John Turner, producer James Bartlam and director Victoria Lapping.

Describe what your film is about?

John Turner: Happiness for Ducks is a musical about depression and keeping your head above water.  It’s about one guy’s day-to-day life living with depression. We don’t tackle this head on, but you see a lot of what’s causing the depression. It’s about him meeting a girl and trying to get out of this bad cycle he is trapped in, trying to move forward in a positive way

James Bartlam: I agree with that completely. To me, it’s about a character; he has not been dealt the best hand in life. He’s had a lot of things go wrong. It’s more about how he comes to terms with it, how he chooses to react to a bad situation rather than let it get on top of him.

What inspired you to write a musical about mental health?

James Bartlam: We had this big period drama the previous year and we thought about all these other ideas that were a little different but about the same size. In my head, it was always ‘we have to go bigger, we have to go better, we have to really push ourselves’. Musical just naturally felt like the next step.

Victoria Lapping: It’s a story I really believed in that I want to bring to life. We didn’t start off with the intention of musical. It didn’t have the kind of feel for jazzy high temp music. My background is theatre, I went to stage school and I love it. But when John said he wanted to do a musical, to be honest, I was very hesitate, I was worried that a musical was going to be really big, and that it would need more care, especially with mental health.  But the songs are like little siliques; they let you know where the characters are at mentally.

John Turner:  It was a character I had in my mind for a while with depression, I felt a lot of myself in there and a lot of the people I’d see around me, my close friends, my family. I incorporated a lot of that, and I guess music just made sense. We are very musical people; we are surrounded by musicians.

How did you find the process of both writing scripts and writing lyrics?

John Turner: I wrote the basic plot and thought about which scenes the songs would fall into. I wrote titles for songs and everyone pitched in ideas from the titles. James, Victoria and I came up with melodies and choruses. We took them to Wales, to Chris Binding, who is our musical maestro, and he turned them into songs. I found it much easier editing the script when I had the fully written songs.

What films or musicals inspired you to create this?

James Bartlam: Well, when John said to me, ‘do you want to make a musical?’ My gut reaction was hell no [laughs]. But then I read the script, still at the very early stages, and I was like, ‘there is definitely something here, I like where this is going’. So, they opened up my mind a bit and made me watch Doctor Horrible Sing-a-long Blog, which I completely fell in love with. Juno was also a huge influence as an indie film, and it’s a very powerful film in its self.

Victoria Lapping: I introduced the guys to more alternative musicals that showed how vibrate the characters can be.

James, how are you finding being a producer from your usual roles?

James Bartlam: Years ago, I wanted to do camera work but I realised it was definitely not for me. I had a much more interest in the sound design of films and the emotions you get from that. In the last two years or so, I’ve realised because of my personality and because I love being around people (I love connecting with people and organising people) that producing was my calling. It was a steep learning curve because with all my other roles, I felt like I was always building my technical knowledge. Being producer, I got to really understand my creative side and I have been lucky to be surrounded by the right people.

Victoria, with the rise of female film directors, such as the director of Wonder Woman, what advice would you give to encourage more women into directing?

Victoria Lapping: You have got to be open to criticism, especially being a woman in the industry. You need confidence and belief in yourself and in what you are trying to achieve. Don’t surround yourself with fools and rise above the sexism. Surround yourself with a very strong team who don’t see gender. Most of the Happiness for Ducks team are male and I just feel like a director not a female director.

James Bartlam: The way Victoria directs is very caring; she genuinely wants the crew to connect. I honestly think that’s the best way to direct.

John Turner: Female directors can be belittle or ignored and not given the same respect. I’ve seen people speak to Victoria in a way they would never dare speak to me. Women should be given more opportunities and more encouragement into these roles.

What do you want your audience to come away thinking or feeling from your film?

Victoria Lapping: We don’t want to dictate to people on what they must feel or think. I just hope they can take something from the film. In this day and age, many people have suffered with mental health, or know someone who suffers from depression; it’s kind of inevitable unfortunately. So, this is to say you are not alone, that it’s okay to say ‘I suffer from mental health’ especially now it’s becoming less of a taboo subject. But, we also would be happy if people came away from the film being entertained just by the songs or the acting

Audiences can see more on this film at https://www.kickstarter.com/projects/1124051049/happiness-for-ducks-by-twisted-pixie