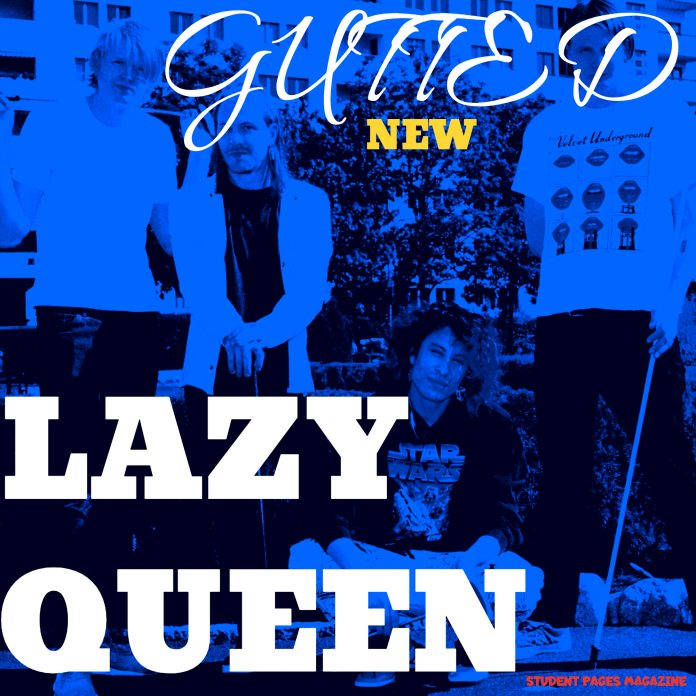 Returning for the next chapter in a story of struggle, addiction, recovery and rebirth – Oslo-based alt-rock outfit Lazy Queen have never been the kind of band to shy away from addressing difficult issues in their music. Their new single ‘Gutted’ is the third chapter in their story battling a self-destructive path of addiction and damaging behaviour. Written and recorded, shortly after lead singer Henrik’s final and most serious overdose attempt, it’s an incident that changed the dynamic and outlook of the group of friends and bandmates to the core.

Henrik explains how they never set out to be in the music industry. Pointing out how as a kid Henrik discovered that there was no other way of living life other than to be in a band.

“I wanted to play music because nothing but music ever made sense to me. It’s always been the way I access certain things in myself, and it’s also always been my preferred way of expressing myself to those around me. I’m quicker to share deeply personal discoveries in a song than I am in conversation.”

The artist’s favourite tune to date is Gutted, with it’s “siblings” from their upcoming bigger release hold ing a very special place in their heart. Henrik explains how the songs are so much more to the band than just lyrics. Defining their music as therapy sessions with a catchy hook, Henrik highlights how they encompass personal development, painful memories and moments that ultimately define who they are.

For the fans, the band are keen to form a connection through their music. Offering a sense of relatability through their music. Relatability. I honestly don’t care for telling people how to feel. There’s just no right or wrong here. Henrik highlights how their new songs were all written from events which Henrik openly admits would not have seen the artist through without the support of loved ones.

“I’ve been dealing with various mental health problems all throughout the better half of my life. I don’t think that comes as any kind of a shock to anyone who’s listened to our music, as it forms the subject matter of more than a few of our tracks. Music has always been where I process and work through my stuff, and especially with Lazy Queen, which started from me needing a channel for honesty and opening up around how I was feeling at the time.”

Social media has allowed the artists to communicate with their fans in real time, highlighting how it has afforded the artists opportunities to invite people into their band in a way that they probably wouldn’t be able to without it.

Henrik explains how for the last three years Lazy Queen has centered around a very tight group of friends, and within that group there is a group  of incredibly talented people who do other things than music, ranging from graphic design, tour management, sound, light and their dancers. The band make a note of pointing out how much of a blessing it has been to find a group of people who truly get what they are  trying to do, believe in it, and who invest their time and abilities in the project.

For the artists, the key has been to trust within themselves. To ultimately stay true to who they are! The band are currently working on new songs, and putting a lot of energy into their new release.