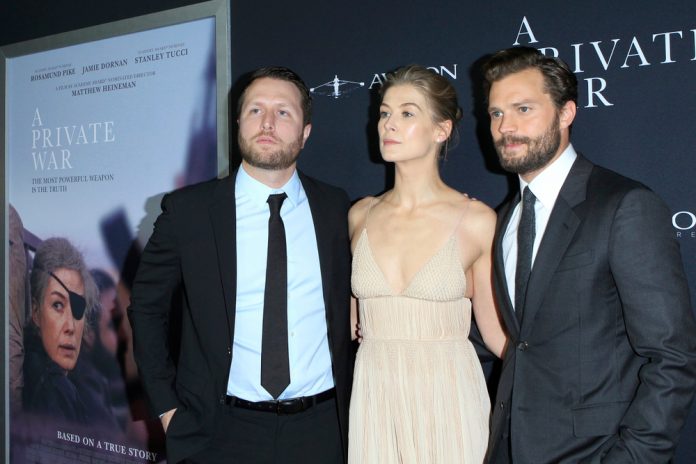 A Private War is a fitting tribute to Marie Colvin; a journalistic inspiration for the next generation. Directed by Matthew Heinemann and starring Rosamund Pike, this biographical love letter pulls no punches with the emotional weight of being a war correspondent.

The film goes into detail about Marie and her life on the front line as a war correspondent for The Sunday Times; covering an 11 year stretch of the woman’s life in all aspects. What immediately stood out about this film was having a strong female lead without any form of gender fuelled political agenda being involved. This film is about the story and telling Marie’s truth in the most human way possible.  At its simplest form, it is a film about an individual’s battle against her inner demons and this simplicity is what makes the film relatable, no matter who you are.

Clocking in at 115 minutes of thrilling drama, this film portrays the gruesome reality that many people in the developed world never see. Focussing on certain key moments in the journalist’s career, it shows her at her best but also at her worst. In a bid to get to the truth, the film is as much about the world at conflict as it is about Marie’s own inner conflicts in dealing with her experiences in these numerous war torn countries. My praise goes to Rosamund Pike for her excellent portrayal of Colvin; from every fierce comedic comment to every heartfelt tear shed, I felt like I was living the experiences along with her.

Heinemann does an excellent job at putting us right there with her; face down in the dirt or whisked away into the madness of a journalist’s first draft. Using various montage sequences as well as sharp, concise cinematography; the film is an enjoyable, if not difficult watch. While we are treated with beautiful long shots of the Iraqi desert, we are also bombarded with erratic sequences that are not for the faint of heart. While the style is an attempt to make the viewers feel and live the confusion that Marie may be feeling at any given point, it can make the film daunting to follow at certain points.

However the film stands as a testament for its ability to capture the rapture that mental illness can have on the mind. What the film does amazingly well is convey what every survivor of trauma has to face on a day to day basis. The way the film allows Marie’s trauma to leak into her every-day life at home is a testament to the writers Marie Brenner and Arash Amel’s understanding about trauma in the real world. In this aspect the film, again, makes itself relatable to real people in the real world.

Overall, the film is not for the squeamish. Dealing with very sensitive emotional issues such as alcoholism and PTSD, the film doesn’t shy away from the true horrors of war with its brutal, gory imagery of bombardments and mass graves. The film gives the viewer a realistic insight into the harsh world we live in and with that, proves itself as an eye-opening piece of cinema.

Theatre of First-New Immersive Venue Set to Hit The Capital