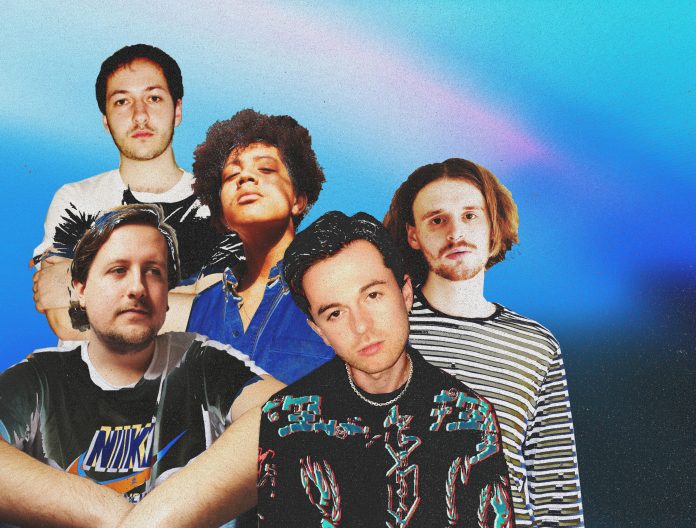 Building on the momentum of their 2019 debut single, Aylesbury based quintet BIRTHDAY CARD, caught up with Student Pages following their anticipated new release “Radio Star”. A single which they admit pushed their production process through constant experimentation refining the type and style of music they wanted to create.

Having formed a number of year prior,  the band references a lot of writing and experimenting that predates their earliest releases. Highlighting Radio Star as being their favourite creation to date, the boys note that for their listeners what they are striving for is an emotive feeling to their music.

“We’re lucky you have a great group of friends and family surrounding and supporting us. They create an atmosphere we feel inspired in.”

The boys admit that their musical style is not for everyone, something they are “cool” with. Ultimately creating music and working together to create something has always been a great energy for the band, and something they take with great humility.

Social media is vitally important to the boys sustainable growth, no more so than within the music industry. The increasing development of social media and technology has enabled the artists to showcase their creativity and develop a relationship with their demographic far easier than allowed before. It’s something the band speak about quite often.

“People love the idea of connectivity and being a part of something; the more you engage with the people who consume the music/content you create, the more likely they are to invest in you further.”

For the band, finding people in the music industry has never been of primary focus. More so due to the network of friends that have within their inner circle. Paying tribute to the artists they look up to and provide inspiration (Charli XCX, Kanye West, Porches, The 1975 and  Bon Iver), the band explains how it has always been important for them to gain inspiration from themselves and their collective experiences.

One key item the band highlights of great important is maintaining as present as possible and to not be too hard on yourself! To trust your instincts and the process. The rest will follow, whether this be positive or a challenging experience.

Radio Star is available to listen on all streaming devices now. @BirthdayCard