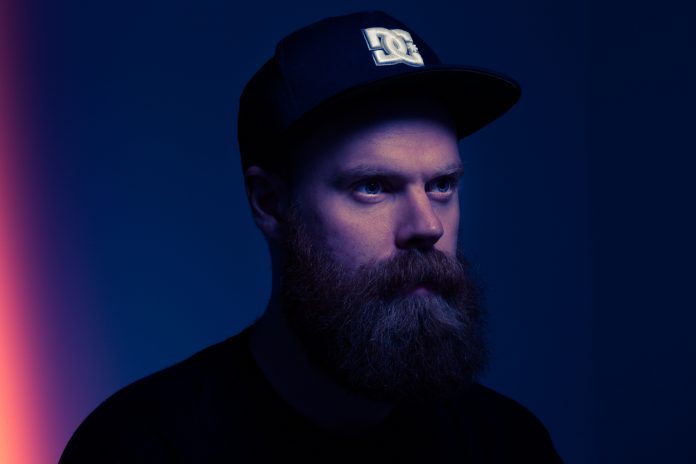 Scotland’s Gav Hislop has long been on electronic music’s radar, with performances and releases as Babyshaker. A superior professional sound designer, he has shifted gears to an expert display of controlled demolition in drum n bass & beyond under the name Blockdata . Releasing on Therapy Sessions, Triple G Recordings, Sonicterror, and Abstrakt Reflections previously, this is the first solo vinyl release of the project.

Hislop has been interested in making music for most of his life he explains. Having started playing instruments in his early teens, the artist’s journey took him to college and then university to study different aspects of music. “I’ve been writing and releasing my own productions for the better part of the last 15 years”. Openly admitting how he has never truly considered himself to be ‘in’ the music industry but more on the fringes of it. Pointing to music not being his primary source of income until recently. Nonetheless, an art form born out of an extremely obsessive and time-consuming hobby.

We caught up with Hislop following his latest entry Vacuum Decay. The artist noting how all his tracks start as small experiments which are usually just ways of teaching himself new things. Whether this take the form of new production techniques or a music theory concept. He explains how typically, if the outcome of the experiment is something that sounds fresh or has some musical potential, he will expand on that until he has the makings of a track and take it from there.  “As the tracks on this release started to come together on their own, I found myself subconsciously grouping them and working on them together, little bits at a time”. Further explaining how once he has collected a group of half-completed tracks together is when he starts to think of a concept for their release.

Hislop highlights how has pretty fond memories of listening to Tubular Bells and Marillion on cassette tape in his parents car growing up. Noting how his father was responsible for getting the artist into metal as early as primary school, which eventually led him to getting his first guitar. Some of my best friends are producers I’ve met from the music scenes I’ve been involved in over the last 10+ years, he explains. With special reference to his wife who admittingly provides way more time to make music than he should probably ever be allowed. Hislop points out how being able to have a group of people to bounce ideas off and provide honest feedback is extremely important. “I absolutely rely on a few people who I know I can trust for objective feedback about my composition or productions. It’s hard to find that sometimes but it’s hugely beneficial”.

The artist believes its important to decide why you want to work in music. Highlighting that if the only reason is that you want to make money then you find a different career route. Blockdata is currently working on a few different projects. Having recently completed a remix for a norweigan jazz artist called Ars Dada. In addition to working on a hard DnB two tracker all while waist deep in writing an album which he is very excited about.#watchthisspace