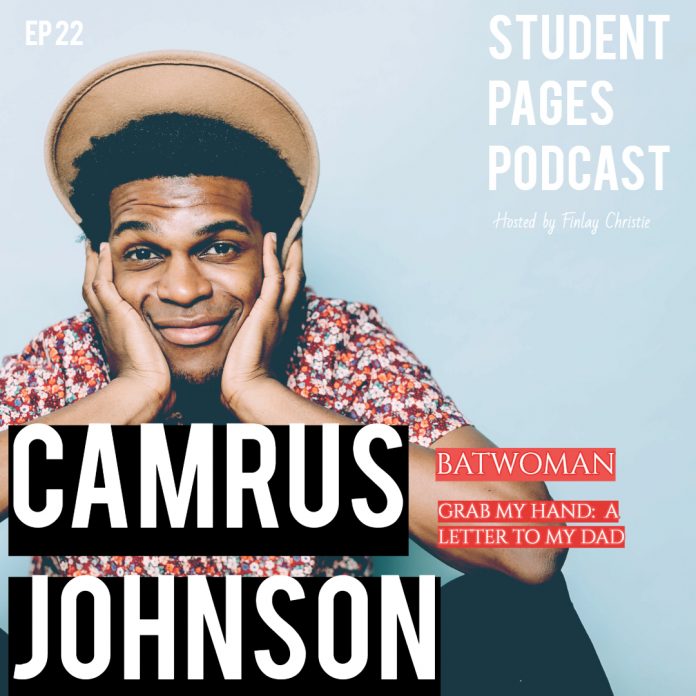 Finlay catches up with Actor, Writer and Producer Camrus Johnson to discuss Season 2 of Batwoman, and his new Oscar qualified short film (directed by Camrus himself); “Grab My Hand: A Letter to my Dad”, a personal story of grief, those we look up to, and how the interactions we may deem insignificant may play a huge part in how we live our lives. Currently taking the film festival world by storm #watchthisspace

Success looks different to everyone. It’s a small word – yet it has big consequences. It can mean accomplishing a goal, attaining wealth or upholding honours you’ve striven to attain. Whatever success looks like to you, there’s one thing all prosperous people can agree on. In order to get to that end destination, your journey must be
fuelled by an unwavering and relentless fighting spirit.

Someone with ample amount of fight left in him is rising star, Camrus Johnson; as he continues his quest to become a firm resident in Hollywood. Ever since deciding not to follow in his families’ military footsteps during his early teens, he embarked upon a different kind of fight – to knock down the doors of every blockbuster producer until one finally realized his
unwavering talent. Now armed with the acclaim of a lead role in DC’s Batwoman, it’s clear for the world to see Johnson is well on his way to fully achieving his mission. But when the going gets tough, what does it take to stay true to your battle and keep on fighting? Student Pages caught up with Johnson to find out.

Not all superheroes wear capes

Coming from a family with deep vocational roots in the military, a young and lost Camrus knew he had to embark upon a different kind of adventure. Like any young high-school student, Johnson was unsure whether fate would take him down the same path. Not knowing where to turn, a fateful chat with his mother paved the way for a different kind of
future: “I always thought I was going to go into the Military,” Johnson recalls. “My mom actually was the one that told me to give acting a shot.”

With a new fortune now set, Camrus tells us how thankful he is for his parents’ support. “I wouldn’t be an actor without my parents – and I mean that wholeheartedly,” he stresses. “I decided to not go into the military because I didn’t like being yelled at. I didn’t like doing push-ups for no reason. I didn’t like having to iron my shirt every day. It just didn’t work for
me.”

With senior year fast approaching, a young Johnson once again looked to his mother for advice – and the rest is history. “Her exact words were: ‘you like to be loud and obnoxious, so try acting’.” It might not sound like the type of dialogue you’d find in the latest blockbuster drama, but these earnest words are pivotal to Johnson’s future, and ones he is incredibly
grateful for.

Speaking of those he rubs shoulders with within the industry, he reflects on how lucky he is to have a supportive family when he first began pursuing his dream. “I know so many actors who went to college just because their parents wanted them to. When they got out of college, they didn’t want to be an actor anymore because, four years later, they think they’re
too late in the game. If they did try after college, they just weren’t in the same headspace as
everyone else who started when they were younger.”

That said, your family not sharing your vision shouldn’t be a hurdle – affirms the Hollywood actor. “To be an artist, you really have to be your own number-one fan. If you don’t have that support – the blessing of close family to push you forward – sometimes you just have to listen to your heart and do it anyway. I know artists that pushed away from what everyone
was saying because they knew in their hearts and brain that’s what they should be doing.” As Johnson poignantly iterates, going against the grain of your family’s wishes may be tough – but the results will truly be worth it.

And while the discontent of parents frowning upon his life choices was certainly absent in the Batwoman actor’s rise to success, he still fuelled from the same fire of persistence when proving his talent to the rest of the world. “I never really gave failure a chance to exist in my career,” he states. “It was either become a successful actor – or die trying. If you have a plan
B, it’s very easy to fall back on it because plan A is really hard. I made sure not to have a plan B. Plan A was my only plan. Every time I hit a bump or lull in my career, I’d sit down and I’d cry it out – but I just kept going.”

Whatever fight you’re currently facing yourself, Johnson urges one thing – to keep striving for that goal. And remember, superheroes don’t have a plan B.

Perks of the job

In today’s competitive business market, all jobs come with perks. It could be a 4pm finish on a Friday, or free alcohol on tap every other Tuesday (we can dream, right?). But when you embark on a career that’s a little out of the ordinary, what are its perks? Aside from the obvious hefty pay check that comes along with fame and fortune, artists pursuing success in
their craft often seek a more emotional reward from their role. For Camrus, the recompense of his passion for acting comes in the form of inspiring others to follow their dreams and move audiences with his craft. “Inspiring anyone to do anything
good is great,” he enthusiastically tells us. “If I can do that with art, I’m happy. But I think the best part about being an actor is being rewarded for understanding people. My whole job is just to get people. To read people. To watch people. To understand how people work. So it’s really nice that I’m always acting, because I’m always learning. And when I learn to become
a better person, I become a better actor.

That in itself is a pretty great perk, if you ask us. But not only are actors like Camrus blessed with the gift of positively affecting audiences – it provides an opportunity for personal growth in myriad ways. In what other role are you able to share stories so movingly, as well as captivate the hearts of many? Aside from working in the local pub and hearing the narratives
of all the locals in there – there’s hope for your part-time job yet – acting comes with its very own niche benefits. “The other beautiful part is being able to share stories,” he tells us. “There’s just so many stories in the world. There’s just so many stories in the world. You find that as an actor, there are so many brilliant scripts that won’t be seen by everyone in the
world, and some great movies that won’t even be seen by anyone.”

With this in mind, the thrill of landing a big role becomes even sweeter knowing you’re able to tell that story to many others, the actor speculates. “It’s a beautiful thing to be a part of that story. All the actor is doing is telling the audience what the writer wants to say. I love becoming other characters, it allows you to connect to people more. That’s why actors, for
the most part, are so friendly and connected.”

But what does it truly take to become a great storyteller? The words of your Year Four Primary Teacher aside, an inquisitive and analytical mind usually come as standard. According to Johnson, to truly be able to convey a narrative, a psycho-analytical brain and a keen interest in psychology comes hand in hand. “I don’t think it’s a coincidence that a lot of
actors have majored in psychology. I didn’t go to college, but if I did – I wanted to, at the very least, minor in Psych. I find the brain really interesting. It’s funny how you can train your brain to do certain things and your brain just does it. It’s very cool.”

Overcoming fears – a healthy body is a healthy mind

In today’s fast-paced world, it’s more important than ever to stay on top of self-care – and high-profile actors aren’t immune to a case of being overworked and out of touch. To stay healthy, motivated, and set on the target ahead, we all need downtime. Physical health plays an important role in this relationship, as Johnson tells us “Physical health is very important.
Every time I’m boxing, I feel great. I look in the mirror after boxing, and I feel great. Eating healthy at first was hard because I love junk food, but healthy food is delicious and makes me feel good. And the more healthy my body feels, the more healthy my mind feels. And the more healthy my mind feels, the more confident I am.”

Even experienced actors are prone to a serious case of the jitters, and Camrus’ recipe for staying on top-form is one that works and is celebrated by many stars within the industry. Since starting out as a deer in the headlights during his big move to the Big Apple, his confidence has grown as much as his success. “My confidence has grown a lot – it took a lot of work. It didn’t just happen by itself like it does for everyone. Some people have to actually work at becoming more confident. Now I’ve entered a place where I actually am confident, I can walk into any audition room and pretty much talk to anyone. I don’t get intimidated like I used to. I’m pretty comfortable in my own shoes and in my own talent to know what I’m doing is fine and I’m strong because I’ve mastered it.”

But like Johnson so aptly puts, growing confidence of steel doesn’t simply happen overnight. For those in a similar position to a young and nervous Camrus taking his first step into the world of showbiz, he reassures: “For me, being around confident and supportive people was a huge help. When I pretended to be confident, I could sort of trick my brain into being
confident. I’d show my brain this is what I want – I want to be more like this. And over time, there’s this thing called auto-conditioning, where your brain starts thinking about it all the time and finding ways to make it happen. Being confident is a part of that – if you keep telling your brain “I want to be more confident” then eventually…your brain will figure out a way to
make it happen.”

So for those currently struggling to muster the confidence they need to take their superhero journey to the next level – let Camrus’ words resound as your mantra: fake it ‘til you make it.

Spotify Vs Apple Music – Which is the best music streaming... 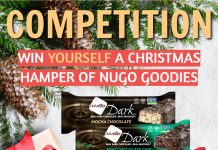 WIN YOURSELF A CHRISTMAS HAMPER OF NUGO GOODIES!! 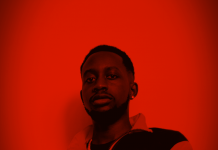 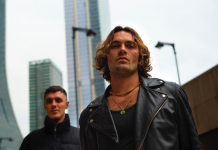