British singer-songwriter Noah Adams, aka NOAHFINNCE, is the next big name in pop-punk’s revival. Finding fame through YouTube and landing a life-changing record deal on the back of it, his lightning-quick rise to prominence was haltered only by a worldwide pandemic.

Amidst the throes of multiple UK lockdowns, Noah has had a lot of time to pause and reflect on his journey so far in recent months―and he does exactly that through an in-depth chat with Student Pages, as we look back on his footings into the world of music. From posting catchy covers on Instagram to blessing his audience with full-length videos on YouTube in his earlier days, it wouldn’t be long before the one-piece act found his own niche in the new wave of pop-punk.

The renaissance of pop-punk has taken a new form in a post-pandemic world and NOAHFINNCE’s popularity has continued to grow along with it, with the musician now cementing himself as one of the frontrunners of the movement. As the genre makes its long-awaited comeback, we had the pleasure of catching up with the rising talent at the forefront of the crusade―uncovering the motivations behind his latest releases.

Stumbling on Popularity by Mere Chance

Like most successful people in the music industry, Noah Adams didn’t necessarily set out for the life he currently leads. In fact, by his own admission, Adams accredits his unparalleled popularity to mere chance.

“I started up an emo band fan account on Instagram and would post the occasional cover,” he tells Student Pages. “This was back in the day where you could only post 15 second videos so I decided to start posting covers on YouTube where I could post the whole song. One of my videos kind of blew up and I thought I may as well take this chance while I have it!”

From here, NOAHFINNCE released his debut track ‘Asthma Attack’ in 2018 which quickly amassed millions of listeners. After gaining traction in various musical circles, it wasn’t long until record label, Hopeless Records, reached out to sign him. 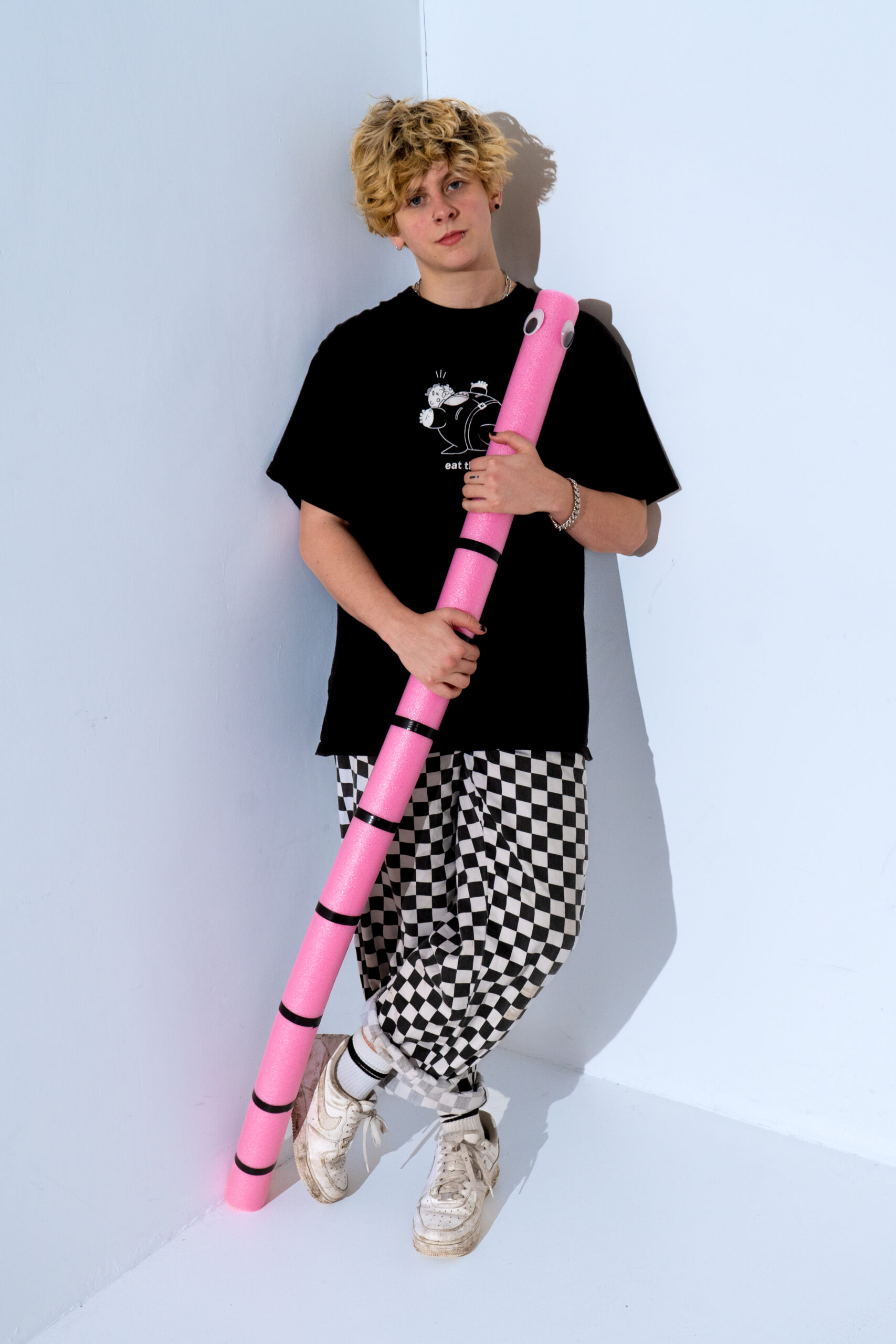 “Everything kind of happened naturally, without real intent which is why I felt so comfortable pursuing this,” he tells us.

That said, music has always been a constant in Noah’s life―getting him through some particularly tough times, acting as a beacon of hope when he needed it most.

Now enjoying success on the back of his latest single, ‘Worms’, Adams reflects on the motivations behind the track and how it resonates with all that listens.

“My first therapy session was actually the inspiration behind ‘Worms’,” he openly recollects. “’Worms’ is pretty much about living with trauma and allowing yourself to acknowledge it. Putting stuff down on paper really does help me understand things better and I’d say writing worms has definitely allowed me to dig deeper into those feelings I’d never thought I’d acknowledge in my music.”

Speaking of his love for his latest release, he tells us the song―much like the rest of his career―was born organically and with ease, having a clear view of the direction he wanted the track to head in.

As someone fairly new to the scene, Noah tells us his love for pop-punk icons paved the way for his unique sound that connects with so many demographics.

“I try to inject as much of my personality, thoughts and feelings into the lyrics and sound,” he speaks of his unique musical tropes. “I love adding little snippets of voice notes of me and my friends and other stuff in my life to make it a concentrated version of my brain.”

And when it comes to getting a true glimpse into someone’s mind, it doesn’t get much more literal than that―and that’s what makes Noah’s catalogue so immersive on so many levels.

On the flipside, the musician describes his sound as chaotic. Having a short attention span, by his own admission, paves the way for a unique blend of angst, and tranquillity. “I have a very short attention span and I think you can hear that in the music I make! Luckily for me, we’re living in TikTok times so nobody really has an attention span.”

That said, it’s a formula that works. In the age of media bombardment every way you turn, it’s safe to say our attention spans are not what they used to be―and sometimes even our favourite album is too much to commit to when you’re on a tight schedule. With this in mind, Noah hopes to be a source of comfort for anyone who chooses to tune in.

“I’d like for listeners to hear ‘Worms’ and feel comforted in the fact that there are people out there going through the same stuff as them,” says the talented musician. “I like to make songs that should be sad into songs that sound upbeat and sarcastic so it’d be cool if people listening could feel a bit of catharsis from that.”

After listening to the many heavy melodic tones and lyrical mastery the track is composed of, we certainly agree―and you can check it out for yourself by delving into ‘Worms’ on your chosen streaming platform.

Noah Adams may not have had the most conventional start to his career, but you certainly wouldn’t be able to tell within the mastery of his artistry. Lyrically, Adams is wise beyond his years―exploring themes most artists don’t delve into until they reach professional maturity.

Growing up in the internet era, Noah reflects on how supportive those around him have been on his journey so far. 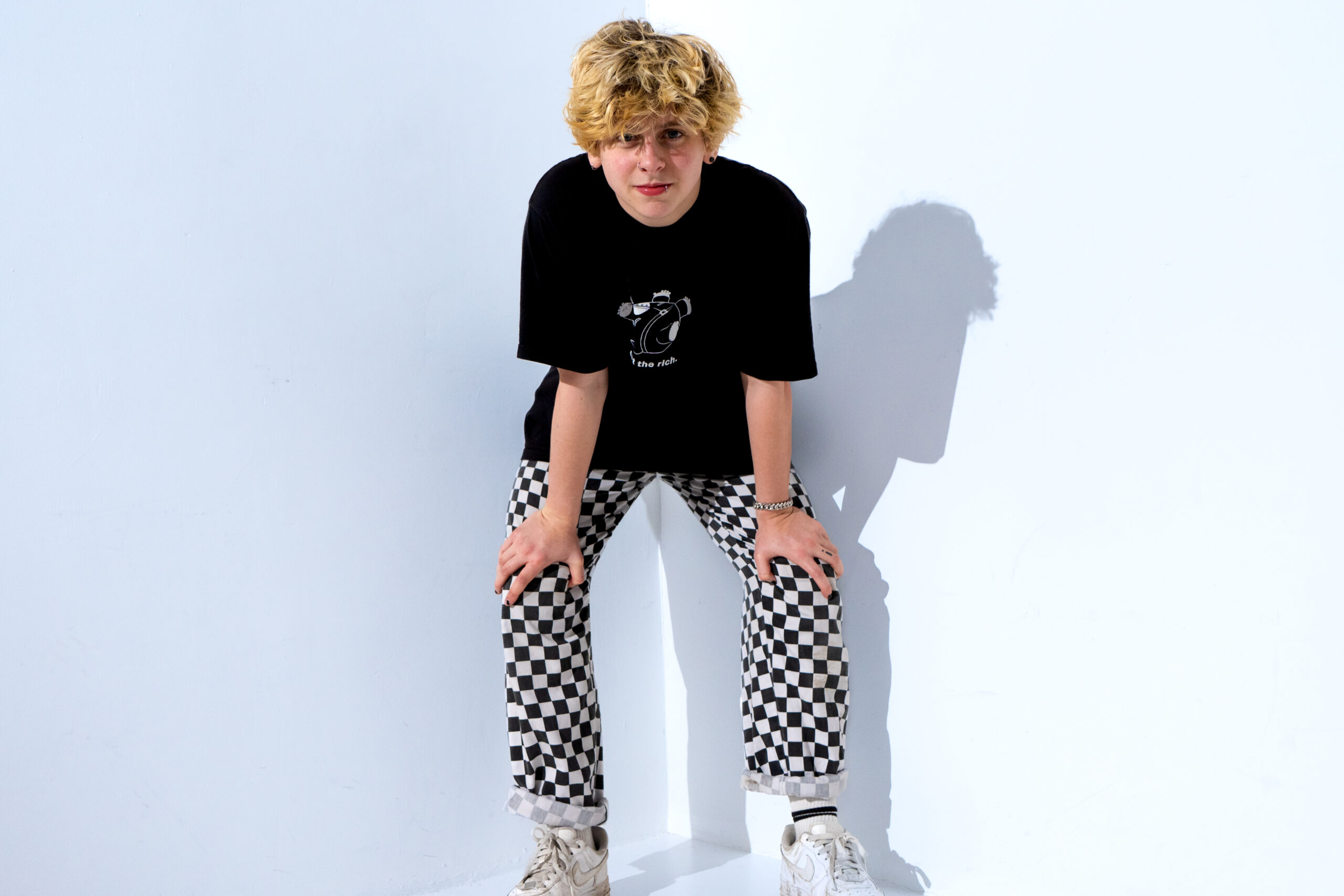 Despite the overwhelming positivity from his support network―Adams unfortunately is not immune to the scrutiny faced by anyone in the public eye. Like many musicians in a similar position, the larger his platform grew, the more criticism he would receive.

But in true NOAHFINNCE fashion, he hasn’t let it bring him down. “I wouldn’t say it’s affected me as much as I initially thought it would,” he optimistically reflects. “I’m lucky to have had a great group of friends and a great team who helped me look past the hate comments.”

A powerful voice for a generation that’s tired of traditional beliefs and the trials and tribulations that come along with a dogmatised society, Adams shares his own troubles during his youth―in the hope that it offers solace to anyone finding themselves in the same boat.

“I went through a lot as a kid,” he looks back to his earlier years. “I was diagnosed with anxiety and depression as a 12-year-old and have had a lot of severe issues surrounding trauma. There were times, for months on end, I had to be physically picked up and dragged out of the car into school because I wasn’t coping with life very easily. I would also get sent to lessons in floods of tears because the school counsellor didn’t know what to do with me.”

Happy to have come out the other side stronger, the now 22-year-old turned to music for comfort during those troubling years. Immersing himself into the back catalogues of various artists, attending as many gigs as he could and speaking to friends with similar music interests saved Noah from an unfavourable fate―and today, he wants to do the same for his fans; advocating talking as openly as possible about experiences of trauma.

“I was lucky that my coping mechanism was somewhat productive I guess,” says Adams. “I wouldn’t really say the stuff I went through is really anything one could overcome but I’ve definitely felt a lot of catharsis by starting therapy and really diving deep into the stuff that happened. For a long time I thought that talking about stuff would do nothing but upset me further, but it really is helpful and I’d recommend it to anybody going through similar things.”

Between a Rock and a Hard Place

When he’s not on stage or in the studio, you’ll find Noah taking his downtime to new heights… right before he hits the crash pad. An avid lover of bouldering, the 22-year-old musician loves to climb in his free time and attributes the birth of this passion to a childhood fantasy most of us can relate to―wanting to become spiderman when he grew up.

“I also love to go karting and watching documentaries,” he tells us, giving us extra insight into his spare time. “But to be honest, I spend most of my free time watching videos.” 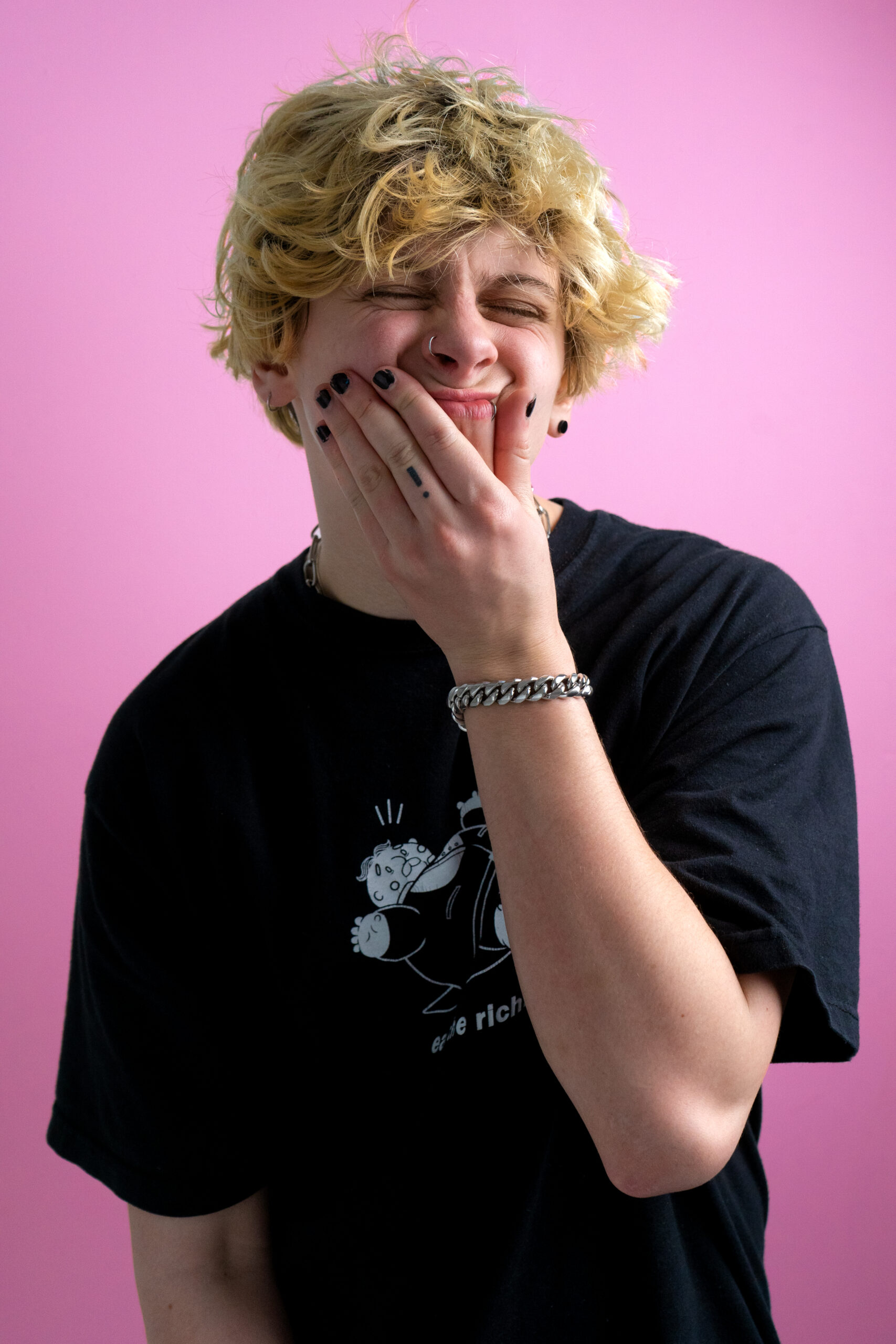 Outwardly, Adams’ attitude to the things he’s faced may appear as solid as the rocks he climbs―but it hasn’t always been that way. Being susceptible to self-doubt and lack of confidence growing up has had a lasting effect on the ‘Worms’ singer to this day, but he certainly hasn’t let it impede his growth.

“Honestly, the biggest challenge [I’ve faced] has been believing in myself,” says NOAHFINNCE. “Everybody around me has been incredibly supportive but the toughest thing is believing them when they say things will be OK! It’s very easy to feel like an imposter in this line of work.”

Imposter syndrome, in any industry, is not uncommon. So if you’ve found yourself experiencing that ‘othering’ feeling, too―Noah has some words of advice that may help you ‘Worm’ your way out of it. Above all, says Adams, talking is key. In his whirlwind journey so far, Noah has kept his life an open book―sharing stories which have not only inspired many to keep a positive attitude, but encouraged those struggling with their identity to never be shy of who they are.

And when it comes to musical pointers, Adams isn’t short on tips that’ll have you well on your way to success, either. Encouraging anyone who wants to start out in creating their own sound, he urges budding artists to favour authenticity over anything else.

With that in mind, finding people truly akin to your style and sound is vital, says the musician. Finding producers he truly vibed with played a pivotal role in creating the impactful sound that saw Noah be catapulted into prominence―and when it comes to starting out on your own, the YouTube sensation advises to stay away from anything that doesn’t ignite that positive gut feeling.

“I felt like I had absolutely no clue what I was doing when I started going to writing sessions and might have felt disheartened if I wasn’t introduced to people who were on the same wavelength as me,” he told Student Pages. “I have such a clear picture of how I want things to sound, so if I had a producer who could not replicate what I pictured in my mind, I’d never be satisfied with my songs.”

And if his thousands of monthly listeners on Spotify are anything to go by, finding people he truly connects with has certainly paid off for NOAHFINNCE. He’s currently working on the final mixes for his next project, and we can’t wait to hear what the pop-punk legend creates next.

DJ & Radio Presenter Jodie Weston on a journey as a...