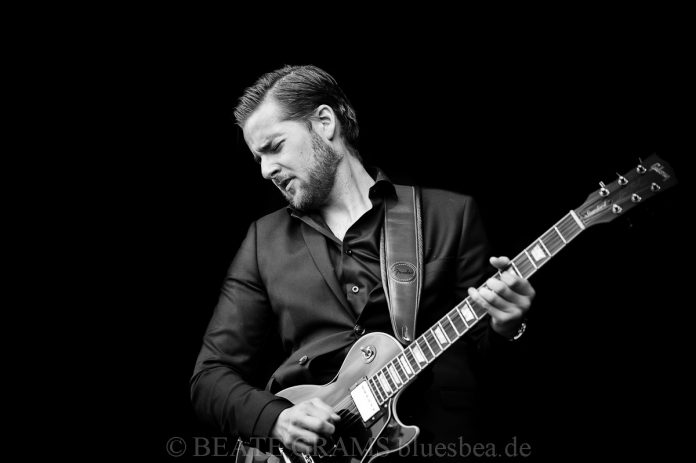 “For the first time in my music career I have been absolutely 100% focused on my own goals and feelings around the song.”

Johnson started playing the guitar in his bedroom from age 9 – 12. The artist remembers being asked very early on by his teacher in the 7th grade if he wanted to play a piece on their school day of the year.

Johnson remembers “this is what I want to do!” from that day forward. Having received positive feedback from classmates and parents, his self-consciousness of playing in front of people changed into confidence. Going onto highlight how he felt like a whole different person!  We caught up with the artist following the release of his new single “Stay within Range”. Johnson pointing out that it was not until he was 17 that he started to write and sing his own songs. Beginning the journey as an ‘artist’, and not as only a guitarist.

For the artist his latest song ” Stay Within Range” is a milestone for as a writer and producer. Highlighting how for the first time, he has had the freedom to be true to his own work and find trust within himself!  Johnson’s inspiration of the song came from reading a book about Bruce Dickinson from Iron Maiden, as well as reading a book by a Norwegian hiker. With a focus on mindfulness in modern society vs being alone on the artic pole. The artist describes his music as an answer for all the questions the artist has within his life. As for “Stay Within Range”; Johnson hopes people will find the song catchy and feel some form of recognition in the lyrics of the song.

“Different questions and answers for different times. By this I mean both lyrically and musically. I write from my thoughts and feelings around different happenings in my life. This can be meeting new people, hearing inspiring stories, sounds, views etc. “

Johnson openly admits to love experimenting with sounds! Highlighting how his music stands out due to his take on “modern” pop/rock way of making music, mixed with experimental, old school guitars and instruments.

A huge part of the artists career has been his parents for encouraging him to chase his dream. He notes how he simply wants to improve and get even better so that he can show himself, the world- or that particular person that he can make it.

“The last couple of years, my soon-to-be-wife has been a fantastic support and inspiration for me. She has been there 100%, 24/7 and has motivated me when my percentage of motivation has reached rock bottom, which is something that happens from time to time. “

The artist believes as long as music gives you your life’s meaning, to keep playing as much as you possibly can! The more you play, the more music will make sense in your life. To embrace working with other musicians, go out there and play live!! “Just play as much as possible and have as much fun with it as you can! We musicians are lucky creatures… we are able to find so much meaning in our life only with focusing on one thing (Music) “.

He highlights how his biggest challenge to date, has been changing his whole music career upside down and reaching a completely new audience.  He is currently working on releasing his new EP, alongside with two more singles to come in 2021.  In addition to a new Jazz Project to be released in 2021.