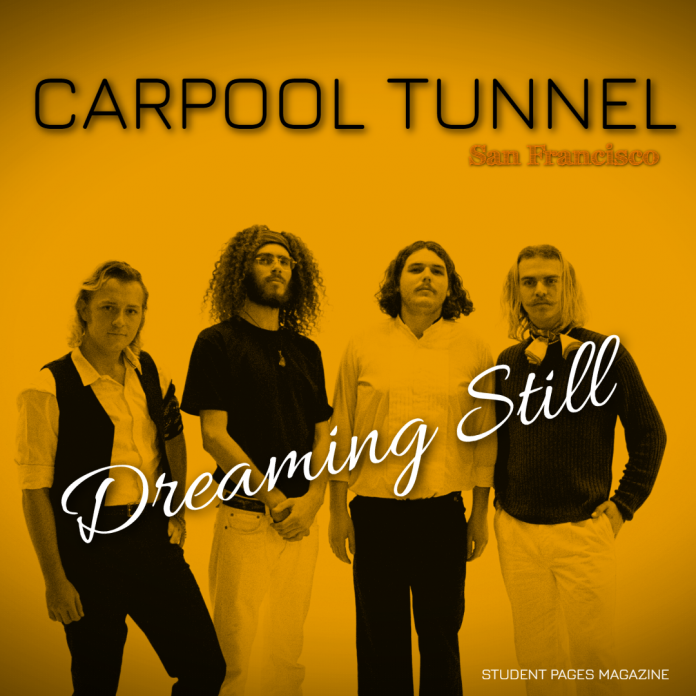 In a world dominated by the refined sounds of the current digital age, Carpool Tunnel’s sound dares to stick to the roots of rock and roll. Fronted by Daniel Stauffer (drummer); Bradley Kearsley (guitarist); Ben Koppenjan (singer/guitarist); Spencer Layne (bassist); & armed with guitars, a bass, and drums, the US band bring a new found energy to the room. Disco-bops, anthemic punk tracks, indie bangers, blues jams, heartfelt love songs, and psychedelic schmackers are all wrapped up in a set of high energy, tear-jerking, pit starting, peaceful chaos. Naturally, we had to find out more, so we caught up with the Californian band following the release of their latest release “Dreaming Still”. The final installment of their debut album “Bloom” being released on the 26th February ’21.

Growing up in Orange County

The boys explains how they grew up with different interests, but all with a clear defining moment in their lives that helped them realize they want to make music their careers. Meeting each other was the best thing the boys ever did, they explain. Going onto highlight how they all shared the same values and vision for the music they wanted to create. The band constantly take inspiration from life all around them, they explain. Noting how their family, friends, partners, in addition to other musical influences that came before them, has played a huge part in who they are today.

Their latest release [Dreaming Still] was written a week before the boys recorded their debut album [Bloom]. An album which they are extremely proud to share was recorded in a single practice session! “As a band we were trying to create a bouncy vibe that was missing on the album and the lyrics just sort of followed. As artists, this experience taught us how to write a good song in a limited amount of time”, they explain.  Highlighting how it was one of the first songs they ever wrote. Formulated from ideas in pre-production. The band explain how they had never gone through the process of creating an album in a full studio with producers. “It was definitely a learning experience for all of us and built our songwriting skills immensely”. The boys explain how the inspiration for [Dreaming Still] comes from the idea of overindulging in dreams and whether or not it can affect your overall mental health. Seeking to question whether or not if it’s better to be more in touch with reality or more in your head dreaming about the future.  Whilst the answer is ultimately left up to the listener’s interpretation, the boys hope this song causes people to think more about their own dreams and pushes them to not forget about what is most important to them.

The boys are keen for their listeners to feel love, freedom, and inspiration in knowing that the Carpool Tunnel community is a safe place for everyone to truly express themselves. Highlighting how their songs have a lot of different thematic elements that open up the types of emotions that you’ll feel in the crowd. Keen to stay true to their sound, the band look to change up their genres and styles to include all kinds of different musical elements and culture in their music.

They explain how every song on the album comes from a different place in their lives. “Better Now” details the band’s collective struggles to stay afloat when juggling all their responsibilities, “I’ll be Your Friend” was written at a time when they were dealing with lots of self-doubt and needed to know that they had each other’s backs through thick and thin. “Forget My Name” was written at a time when the boys were struggling in their relationships with others. All pointing to songs that provide the artists with a release of emotions that would otherwise be pent up inside of them. Highlighting how they all know that it is better to let it out than keep it in.

Pushing through the Brick Wall

Bradley [Kearsley – guitarist] explains how he grew up in a very tech-centered city and school, where the community and the people around him did not place value on art and music. He remembers how he was openly mocked for pursuing and sharing his music. However, this only motivated him to push through the brick wall in front of him and work harder. Spencer [Layne – bassist] found himself in a similar situation, attending a STEM-based tech school. Explaining how everyone could feel that aura of elitism, which fed into a very toxic school environment where he felt disconnected from everyone and the world.

“We each struggle with our own mental health in unique ways, but part of what connects us as band members is our shared experiences with anxiety and depression. We often use the music we write as a form of escapism for our own troubles, but also as a way to manifest the positivity in our lives”.

The band like to write songs about how things get better, even if in the moment, things don’t seem like it. However, making a note to point out how it’s equally important to realize the brightest moments coming out of a phase of depression. That’s where you learn so much about yourself and others, and gain new perspectives, they explain. Where feeling low from time to time is a natural thing, and so is healing.

The boys highlight how they have been incredibly lucky finding a producer and engineer that understood them as a band and could see their vision as well as they could. Pointing out how Danny Balistocky and Ramtin Khoe really understood them as individuals; and in doing so were able to remove ego from the production room and give they boys the opportunities to express themselves individually through their art.

Their advice is to start now! To give it your all and put yourself out there. To not worry if you don’t think it’s good enough or not exactly how you envisioned. It’s a process of growth and the more you try, the more confidence you will build in your craft.

Their debut album, Bloom, comes out on February 26th! The band are admittlingly humbled by the incredible team behind them and are extremely excited about the journey that lies ahead to spreading their music and love to as many people as they can. They make a point of noting how this album truly shaped their lives, and are extremely grateful they are able to share it with the world! #watchthisspace