Based on the award-winning 1998 DreamWorks Animation film, with music and lyrics by Stephen Schwartz (Wicked, Godspell), The Prince of Egypt is unlike anything else in scope, scale, or consequence. Featuring a cast and crew of 154, the seamless power of the show is made possible only by the skill and passion of all those who work upon it. The clashing destinies of two brothers, divided by privilege and exclusion, comes to the stage, and finds its home in the West End!

A man born into slavery and appointed to lead his people to freedom; the production is a masterpiece of narrative, illusion, and sensation, submitting a rousing call to the resurgence of theatre, and, as the opening bars of ‘When You Believe’ break, a timeless message of hope, resilience, and faith.

Luke Brady (who plays the character Moses) is simply sensational. Alongside his co-star Liam Tamne (Ramses) who is equally brilliant. The real genius behind the story telling of The Prince of Egypt is the way in which the story is told. Growing up and being enriched by the history of the Hebrews and the Pharoahs from a very young age, the inherent reference to how this story plays out in the real world, could have easily taken a different route. Instead, you find yourself thrust into a magnificant piece of story telling encompassing the most sublime dancing; singing and stage production. In writing this review, to actually try to place this show into words, does not actually do the cast and crew justice.

The Prince of Egypt is a true ensemble show, where every single performer is essential to telling the story, and does so in their own distinctive way. Uplifting, life-affirming, and epic, the production also evinces the reciprocal, ever-learning nature of creativity.

If you have yet to see the Prince of Egypt, it is without doubt in my mind a production that you must bare witness to, to truly grasp how magical the theatrical interpretation of this story stretching back over 2000 years is. Finishing the season on the 8th January 2022; this is your final chance to see this incredible West End production live!

Get Your Tickets Today! https://www.theprinceofegyptmusical.com/ 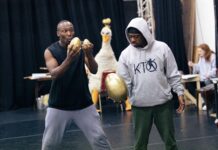