Amelie Anstett, well known for her role as Sadie on BRAT TV, has always loved performing and making people smile throughout her career. Though it wasn’t until more recently that the teenager from Winter Park, Florida, discovered her passion for acting. “Dance has always been my thing—still is and always will be —but when I started acting, it was so cool to unlock another realm in this industry”. Having always enjoyed theater and playing characters/entertaining people; Amelie openly admits to never fully pursuing acting until now. Ever humble that she has the opportunities to do so!

The actress feels incredibly fortunate to have had her family by her side; having spent a lot of quality time with her father in her younger years. Pointing to how her father had an incredible impact on shaping who she is today. With particular reference on ensuring her and her brother grew up with an appreciation for nature and all the beauty it has to offer.

Amelie explains that when she first started dancing she was simply trying one to two classes per week. This subsequently led to further participation at her teachers request, leading to a tight schedule that would see her train 5 hours per day, taking on competitions as she got older.  “I train in literally almost every style of dance, and I absolutely love performing every style and think it’s so important to do them all”. Amelie’s favorite style is contemporary and hip hop. Whilst both opposite styles of dance; they allow her to express herself in completely different ways.

Auditioning is such a fun process, the actress highlights. Making a point of noting that like almost every other individual, she always get nervous, because she wants to make sure she goes out there and give it her all. To overcome her nerves, Amelie places herself in the moment and character.

“Once I set foot into the day of the audititon, I immeditely start the process of fading into that particular character I am auditioning for”.

When it comes to the parts of being an actress that are challenging, Amelie highlights auditions and going for new jobs the most challenging aspect of being an actress. Having to deal with a lot of no’s which can be really hard and disheartening. Making it even more important to keep your head high, and keep pushing for your dreams.

“I think the best part about being an actress is that we are given such amazing opportunities to become these completely different humans and portray individuals with completely different lives. This is something that I really cherish because it is so fun tapping into these other personas”.

Amelie plays Sadie TK (Hayden Summerall’s) girlfriend in the show [Chicken Girls], and according to the 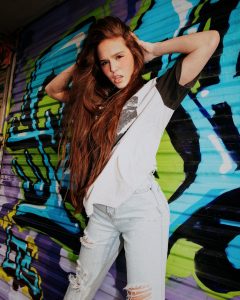 actress, she has an incredible personality on her. With Sadie’s character coming from Texas, in addition to being a cowgirl; offers a huge element of fun for the actress. A character that is described as a country girly girl, filled with confidence and sass, and not afraid to express her feelings whatsoever. Aside from Sadie’s confidence and outgoingness, Amelie admits that they could’nt be more different in real life.

She explains that when it challenges faced by her character [Sadie], the top one would be jealousy. A  character that finds herself very jealousy of TK’s love for Rhyme and overreacts a lot in the show due to her major jealousy to the situations presented. This inner struggle of jealousy, leads to an ego that makes Sadie mean and sassy by nature.

Amelie explains that when it comes to getting into character, it very much depends on the character she is recreating. Taking “Sadie” for example, the actress references how she took real life situations. Having known and seen some mean girls in action throughout her life, the actress always wondered how they must have felt inside to be able to be so cold etc. This led to her taking time to study what it meant to be a mean girl, to allow her time to create that character inside so she could instantly bring it out when the director said, “ACTION!”

As a young woman, Amelie opens up about having her shares of moments of anxiety or brief sadness. Pointing to her family who have been her rock throughout her career, allowing her a place to go to talking things through. “My parents have always been very open with me, which has also helped me through
any difficult moment”. She goes onto highlight how when you are in this industry you are always going to face some sort of challenges, but is equally thankful that she has never experienced bullying in the pursuance of her dream.

One of the biggest factors that helps her not burn out is balancing life and different steps in her career. Pointing out that when you audition, you will get a world of no’s, but you can’t let that discourage you. To keep pushing and committing to your goals. “Every no I have received, I left that audition or looked back on it and left there with something, a lesson, a new contact, a new friend I made while waiting, knowledge, and I carry that with me to the next audition”. To pick your passion and follow it, study it, live it, and then take a breather. Always seek the time to connect to yourself. She highlights how her dance schedule can get pretty grueling, and when in production mode, sometimes she gets exhausted mentally and physically. Noting that she is fortunate enough to have her parents and an incredible management team that encourages work-life balance.

Amelie admits to being an adventurous teen. Highlighting that when she is not acting, dancing, tumbling, etc. she really enjoys boating, spending time with her family and friends, and just living life to the fullest. She explains how she would love to be involved with “Grey’s Anatomy” as she absolutely loves the storyline and the drama behind hooking the audience in. There are a great many things that make the actress feel humbled in her field of work. With the most rewarding aspect from waking up and seeing her dm’s/comments that say she has impacted someone’s life. “Seeing that I can help people be happy or find themselves without even fully knowing them is something I cherish every day. Having my platform, I want to use it to do just that, make people happy and let them know that I support them just as much as they support me”.

Amelie points out that with social media, we can’t help but compare ourselves to others. Noting that the biggest piece of advice she can give, even though it sounds cliche, is that you truly are amazing as yourself. Making the point that we live in these shells and there’s nothing we can really do but accept them. It’s about what’s on the inside—what you can bring into the world and share with others. Work for what you want and do it foryou. Go make your mark!! #watchthisspace

Hope Through the Rain – Deyah on feminism and her latest...

US Trio .wavrunner on their debut single “Uh Huh, I like...