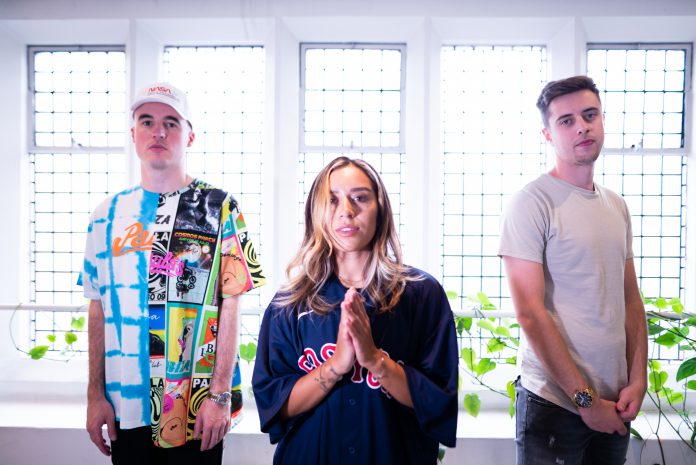 We had the pleasure of sitting down (virtually) with rising pop artists Vize Verza. Made up of Singer/Songwriter Chelcee Grimes; Producer/Writer Ollie Green & Producer /DJ Ben Franklin to discuss their new single “Temporary”. A song defined by one of the trio’s personal circumstances, and on entering the studio, the trio realised that they had indirectly created a concept and the lyrics for a song. “Times like that are when music doesn’t even feel like work, it’s great”!

Ben explains how his journey started at university where he studied Music Technology; and during his time studying, he made as much effort to meet new people and grow his network in the music industry. He points to the importance of building good relationships with people in the industry because if they like what you’re about, they will inevitably introduce you to numerous others which is priceless when trying to break into a highly competitive arena.

The trio describe their music as a “fresh crossover dance”.  Offering a true uniqueness to their songs, with a huge amount of passion, love and need for storytelling. The trio are keen to have their listeners connect with the music they produce. “We’d love to think our music makes listeners wanna get back to the gigs & raves we all desperately miss. Hopefully it’ll be sooner rather than later…”

Ben highlights how he has been very lucky and always had his parents full support with his career in the industry. In addition to being surrounded by similarly like-minded people has been a big factor in keeping himself inspired with what he loves. Finding people a kin to the music the trio want to produce has been immeasurably priceless, as they point out how they have been able to build a close network of true friends embarking on similar experiences, chasing with similar goals. Thus the need to ensure you always keep like minded people around as this greatly assists with keeping you focused on the objective and moving forward.

Ben’s musical influence/inspiration is none other than music legend Calvin Harris. Highlighting his background as heavy dance music. The trio are currently pushing their new single “Closure” whilst working on finishing their next VV release. #Watchthisspace