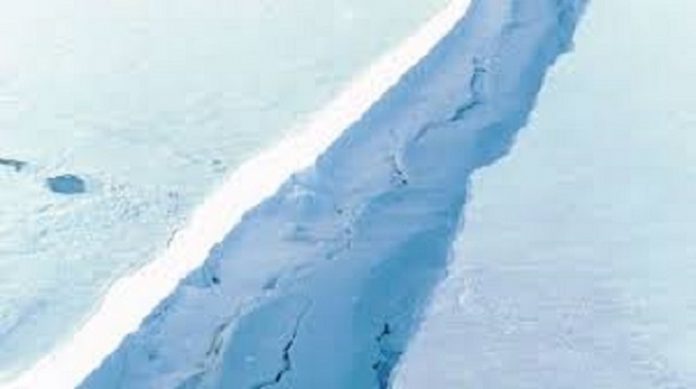 Scientists are warning one of Antarctica’s largest ice shelves is nearing its breaking point. The reason, a massive crack in the ice shelf, known as Larsen C, suddenly grew by 18 kilometers (11 miles) during the second half of December 2016.

In 2014, Satellite images revealed that a crack in Larsen C rapidly extended across the ice shelf. British researchers who are monitoring the crack in this ice shelf believe that only about 12 miles now connect the chunk of ice to the rest of the continent. In the event the crack reaches the ice shelf’s edge, it could snap off a huge-sized area of ice (approx. 6000 square kilometes) Such a loss would reduce Larsen C’s size by about 10 percent. That’s enough to shrink the shelf to its smallest size in recorded history. And it could potentially kick start the shelf’s disintegration.

According to Daniela Jansen, a glaciologist at the Alfred Wegener Institute for Polar and Marine Research in Bremerhaven, Germany: “We should keep a close eye on Larsen C,”….“It might not be there for so much longer.”

Larsen C covers about 55,000 square kilometers (21,000 square miles). That makes it the largest ice shelf along the Antarctic Peninsula. Since Larsen C’s ice already floats in the ocean, the big break-off won’t immediately raise global sea levels. But if the shelf collapses, then glacial ice could flow into the sea unabated and contribute to rising sea levels.

What will happen next? Scientists are uncertain. But the consequences of the break could be dramatic.

Is Climate Change To Blame?

The Project MIDAS group has not made any statement attributing the development at Larsen C to climate change, but has stated that the shelf would be “at its most retreated position ever recorded,” which suggests the possibility of climate change being the cause for this crack.

Previous research has also noted that the Larsen C ice shelf is becoming less thick, making it float lower in the water, which appears linked to the warming of the Antarctic Peninsula in recent decades.

Meanwhile, scientists wait for the anticipated break. Luckman told the BBC that “If it doesn’t go in the next few months, I’ll be amazed.”

But there are few certainties right now apart from an imminent change to the outline of Antarctica’s icy coast. “The eventual consequences might be the ice shelf collapsing in years to decades,” said Luckman.

Scientists can only observe what they see and compare their findings to past events; right now changes are happening at an alarmingly fast rate.

This could be part of a broader pattern for ice shelves.

It’s the latest sign of major ice loss in the fast warming Antarctic Peninsula, which has already seen the breakup of two other shelves in the same region, events that have been widely attributed to climate change. Larsen A collapsed in 1995, and much of Larsen B collapsed dramatically in 2002. Scientists have revealed that this is probably not something that has happened in the past 12,000 years or possibly, even more alarmingly, in more than 100,000 years.

So Antarctica has lost ice shelves before, but none so huge as this one.

The iceberg resulting from this crack will not in itself raise sea levels, but if this ice shelf breaks up even more, that would have an impact on sea levels. Experts believe that if all the ice that the Larsen C shelf currently holds back entered the sea, global waters would rise by around four inches.

Antarctica is geographically a long way from most of us, but what happens there could be an indication of what’s happening with our planet Earth.